A fine days gaming was had with the lads from the Old Guard Wargame club today. I set up a Black Powder rules game to re fight the battle of 3rd El Teb. This battle was the initial driver for doing my Sudan collection so its great to see it played out. 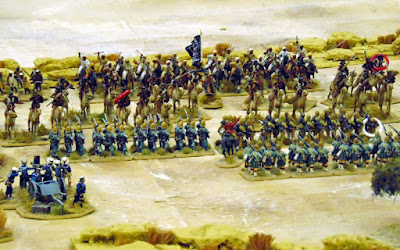 The table we had was 12x6 with plenty of troops for both sides - as per the scenario in the Black Powder rules book . We stuck to this as it was the first BP game for us all and we were all learning. 4 Brits - Roy - CinC , Martin 1st Brigade, James 2nd brigade, John - Cavalry Brigade, and 3 Mahdist players - Pete Cinc, Steve - 1st Rhub- lots of Beja infantry, and Stuart 2nd Rhub - the mounted stuff and myself umpiring to try and learn the rules and how to run a BP game.

it turned into a real duff up. It was played with a great spirit by all - a great game...  so on with the action!

The British struggled to get themselves in order with various failed command roles in the first few turns. The mahdists marksmen and captured gunners were also unerringly finding their mark at long range too.

It was touch and go for the Brits , the initial poor command roles left them problems to resolve. Their  rolls finally came good in combination with some fragile mahdist break tests . It could easily have been two British brigades breaking with a few different rolls .

Overall for a first play of the rules we felt they went well, and were being picked up well. Certainly we will want to play more with the scenario and stats etc ..we will play them again.

We had enough time left just to stick some ancients on the table for a knock about Impetus game - more of that another time.

Not sure whats up for the next days game , but looking forward to it.