The brushes have been resting for a few weeks as i have been on holiday. I have been to Normandy yet again enjoying the food & wine. Of course Normandy is also full of history. I have previously been there photographing wargraves as part of  "The Wargraves Photographic Project". The project aim is to enable families, scholars and researchers to obtain, via the CWGC or TWGPP websites, a copy of the photograph of a grave or memorial which for many is impossible to visit due to the location. When i started there were less than 50,000 photographs, it is now up to over 1.7 million, and also fully recognised by the Commonwealth War Grave Commission. It is very moving when you get a thank you from a relative for taking the time to provide the photograph. A really worthwhile project. 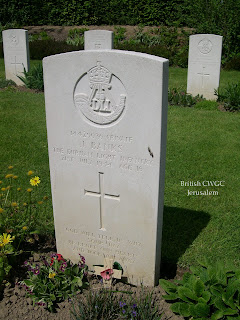 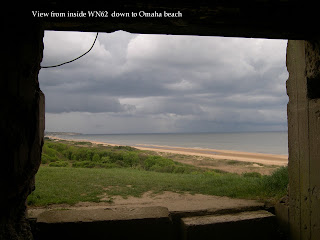 View along "Omaha" beach from inside WN62 - Nowhere to hide. 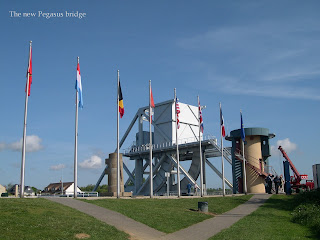 Just how much closer can you land a Horsa glider to a bridge in the dark? 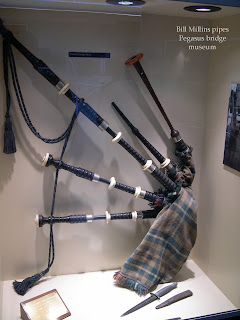 Into battle with a set of Pipes.
Anyway all ready to pick up the brushes again. Next up some Polish Infantry.
Posted by DaveD at 12:02 1 comment:

I have been working on a variety of things this last few weeks. I have been painting some figures I have not done before which are the Trent Miniatures 5/60th Rifles. They were very pleasant to paint. Nice clean crisp castings. These figures do not have backpacks, coats etc ether so not cluttered. Usual dark grey undercoat and then I used the Andrea Green paint ACS09 set and the odd bit of Vallejo Flat Green. The Andrea Color sets give a very subtle change of hue as they give you a dark base coat and then 3 light shades , and then 2 darker shades, the idea is to mix two together each time. it gives a really good effect. They do dry darker however, and as these were to be gloss varnished they need a little extra lift hence using a little Vallejo Green just to lift the overall effect with the varnish 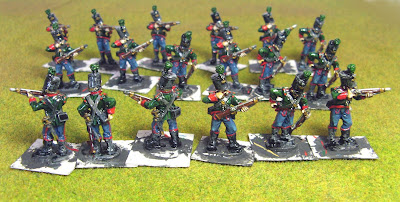 Also a handful of mounted French officers. One of which was an Elite Miniatures Collectors series. This had separate scabbard and reins. Really not sure of the overall value of these to the average collector. I end up replacing the cast reins with some home made ones , I think they looked better as well. 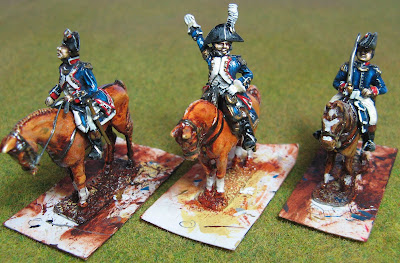 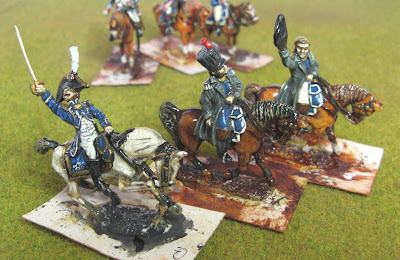 I also took delivery of some of the newer 1815 range of Perry miniatures French command sets. I am not a great fan of Perry stuff as in the past it has all been to me a bit small overall. I was pleasantly surprised by these. There are some some really good story telling sets. The Chief of staff wrting orders, the ADC's waiting and the hangers-on (FN53) pictured here.

.  For now they can be added to lead pile. I have completed casting work on about half the Vistula lancers , so hopefully they will be ready for painting some time in October.
Posted by DaveD at 09:29 2 comments: