This scenario provided some real Hollywood action today. We had 3 players . . The Man With No Name is holed up in the Grand Hotel, with his wanted "alive" prisoner - Bart who he needs to get out of town on the train. Bart's gang 6 of them , 3 at each end of town want to free him. The Pinkertons fresh off the train are also looking for Bart , but have no intention of paying any reward for him.
The gangs moved into town , the Pinkertons head into town looking out for bad guys. At this point the wiley bounty hunter forces his prisoner out the back door of the hotel and around into the undertakers yard.

He bundles Bart into the hearse, looks at the undertaker and says "drive".

The Pinkertons , have found some of the gang , but are still looking for Bart

Meanwhile the Pinkertons and Bart's bandits are busy exchanging fire.

The hearse headed across town, the whip cracking the horses onward, one outlaw was ridden over, failing to notice its approach while exchanging fire with a Pinkerton.

The train whistle was blowing , it would be leaving town shortly. The bounty hunter bundled his prisoner out onto the platform. An outlaw approached. The bounty hunter lifted his pistol, the outlaw panicked at the mere sight of it pointing at him, turning a fleeing.

At this point a battle that had been going on around the stock pen had really spooked the cattle, they broke through the gate at the rear of train, and began to run, initially heading out along the platform, just as the train began to pull away.

The bounty hunter turning and fired into his opponents, wounding them and causing a recovery turn. He forced his prisoner onto the passing passenger car, one Pinkerton and one outlaw made it onto different parts of the train. Bart in a last ditch attempt to save himself tried to push the bounty hunter off the steps of the train, but failed.

There was more chaos as the stampede picked up speed, running down more of Bart's gang.

The bounty hunter moved through the carriage , and shot at the outlaw who had made it onto the steps at the other end of the carriage, who then took fright and jumped off the train. This left only the Pinkerton in the following box car to deal with. The Pinkerton moved to the window and let of a shot - missing. The Man With No Name bit on his cigar, looked down and laughed. He uncoupled the carriage, then fired at the Pinkerton , a head wound.
He would get his reward money after all.

The MNN was played wonderfully by Andy Ainsty (Ainsty Castings, provider of all manner of wargames goodness. A thoroughly enjoyable game.
All in all , a great weekend. We also have invites to FIASCO at Leeds, and next years Triples.

So just a few shots from the morning action

The Man With No Name confronts the Gonzalez brothers... Get 3 coffins ready..

The town sheriff kills one bad guy while the other runs for the train.

The Pinkertons arrive in town looking for their man.

The cowboys have been out on the road again this weekend with a visit to the Yorkshire Riviera.
Wartorn is in its 3rd year, and coincides with Armed Forces weekend, so a wargames show, with displays by the Red Arrows, a Typhoon , and the Battle of Britain Memorial flight. What more could any gamer want. 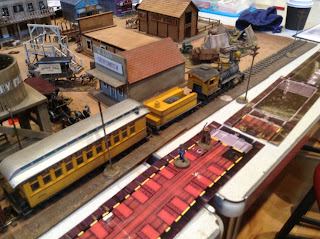 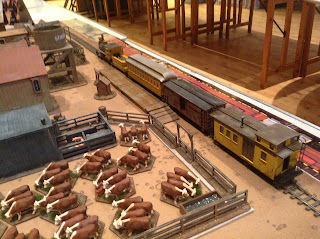 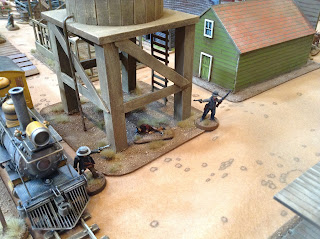 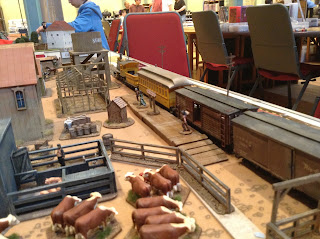 We have played 4 participation games today, involved a couple of visitors who have never played games before who really enjoyed it.

Been working on adding a camp scene which can be used either at the edge of town , or as part of stand alone scenario.

The base is a piece of carpet tile, with PVA and the usual sand mix. The tents are separate Renedra items , mounted on base so they can be used  individually.  The fire contains a blinky so when switched on it flashes to provide the centre piece of the campfire scene. 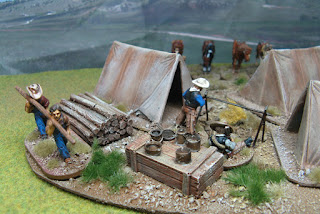 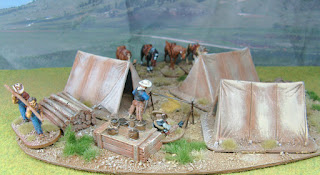 The various pots and pans are by Dixon , as are the 4 figures 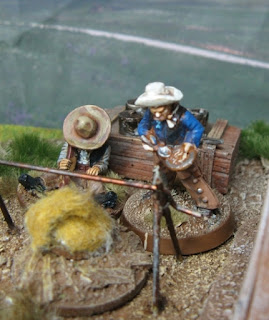 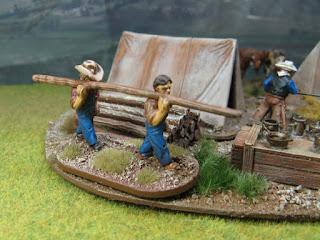 Off to work we go. 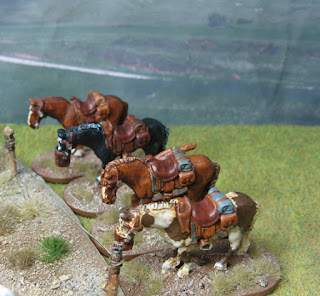 The hitching rope , with 4 hourses by Knuckleduster.

In order to provide some more flavour to the wild streets of "Serenity" I am adding some more items. The brothers Johnson and their "Cure All" tonic. Maybe a swig of it will help the aim or enable that morale roll to be passed.

The wagon is the Peddlers Wagon by Blue Moon Manufacturing Wagons Ho! range. The brothers Johnson are I believe giveaways from the Partizan show - i picked them up from ebay. I just need to find a suitable driver figure. 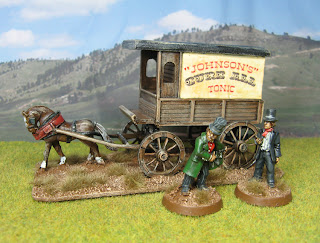 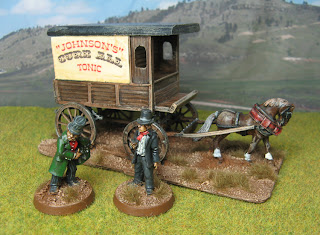 I made the wagon signs by downloading some "Western" fonts from DAFONT (lots of other kinds available and FREE!) and installed them on the pc then in Word , or Photoshop they are available. Then it is a simple print off on clear transfer paper , seal it with and acrylic sealer and once dried apply.

A few more things to do this week for the weekend visit to WARTORN at Scarborough.

Normal service has been resumed. The last few months have been a hectic whirl juggling a host of things resulting in little hobby time. 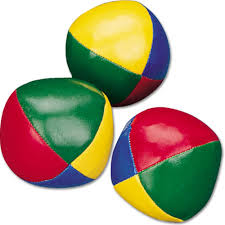 Many thanks to the guys who have been in contact enquiring for my welfare, much appreciated, another great side to the blogger community.

The lead mountain has been completely topped up with a whole host of extras for the "Old West"  collection. Talking of which I am taking it out on the road again next week to Scarborough for the Wartorn show, so if you are there pop by and say hello, or pull up a chair and try your hand at "Blazing Dice" in Serenity Flatts.

I shall be back around you blogs this week catching up.

The paint desk has a project or 3 on it again , so some new creations to share shortly.

So for now will leave you with a bit of Thin Lizzy.....