After a final push over this week these lads are now completed. There was more work to castings overall getting the unit composed and the conversion work sorted than the final paint jobs.No figure is just an original casting & no two are the same. 2 squadrons modelled at the charge and two ready to support.  Each has wire reins added and soldered into hands. Each officer was remodelled from the original casting,with replaced pin swords. There was major work on 3 of the 4 trumpeters. Each trooper has the lance soldered in to the hand with arms re-positioned, the straps from the lance added around the arms as well. Overall a fully unique unit , which I am very happy with. Flag and pennants from GMB.(Yes i know they lost the colours in Spain - but ya need a nice flag!). Lances made from 0.8mm piano wire.Horses were a mix of Elite, Connoisseur and Bicorne to provide variation. Based up for Grand Manner 20mm per figure frontage , 45mm depth. 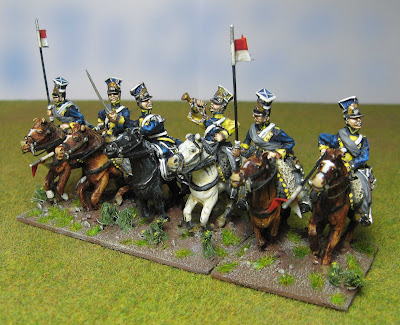 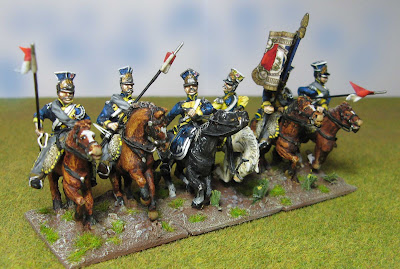 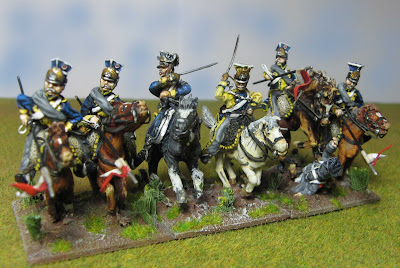 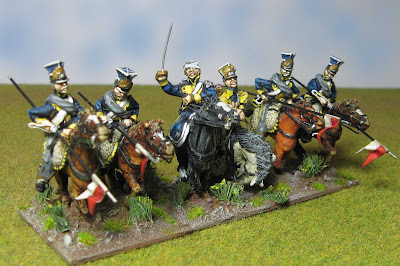 There have been some interesting modelling challenges , all over come and skills enhanced with the soldering iron. I will be adding the Lancers of Berg next year i feel.
Posted by DaveD at 14:44 11 comments:

As the Vistula lancers are nearing completion - just a handful of troopers left to do and the basing I decided to also complement them with a staff officer type figure Lt-Col Klicki was commander of the Vistula Legion cavalry in the peninsular and served in Russia. I had a spare French guard lancer officer figure ("Connoisseur" I think)  in the lead pile, so decided to create one from that.

I have added a flattened pin sword, replaced the cast sword knots with wire and soldered in place. I then filed off the ends of the cast racket & cords on the czapka and remade these from 3 strands of copper wire (from am old piece of household appliance flex) braided together &  wrapped around the plume and soldered in place. The racket is made by wrapping the braided wires around the end of a round needle file to create a doughnut which is then filled in with solder filling. the cord is then positioned in place as if flying loose & tinned with solder to stiffen it place. I also added wire reins. The secret to all this small scale soldering - liquid flux - Bakers No 3. The horse is an "Elite miniatures" one which was completed in the big batch done in the summer.

The blue used is the Andrea Color blue clothes set . A really excellent set of paint shades that work well. 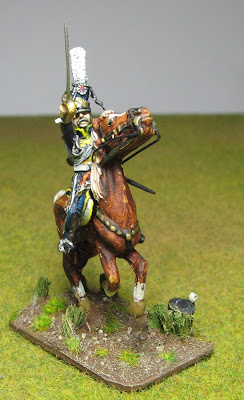 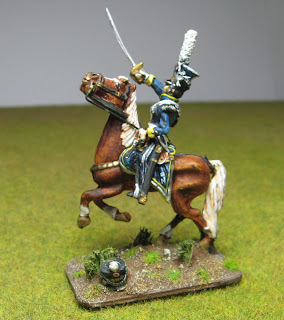 I added a spare shako to groundworks as well Overall very pleased with him.

One man & his dog

I have been working on a different request for a friend last week. Not my usual fare, but I have done plenty in the past. A set of 25 figures for an Anglo Danish warband from Gripping Beast. They are nice clean uncomplicated figures. The only real challenge being deciding on colour schemes, non of this referring to uniform plates stuff! I started with their Chieftain figure. He is pretty simple to do as a lot of chain mail , and then a large cloak. Chain mail is done with a mix of Vallejo Oily steel and Gunmetal ,then highlighted up with a little silver after Matt varnishing.

To this I have also added the Warhound , a large bull mastiff type dog available as part of a set from Warlord games, all nice snarly dogs! 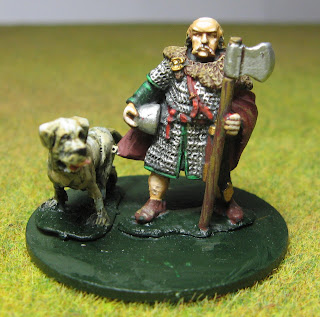 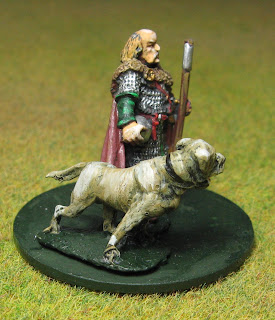 So just the rabble to finish off. He made a nice change to do. I will get some photos of the wole mob done once fully based up
Posted by DaveD at 09:43 1 comment:

Vistula Legion Lancers - getting there

It has been a very busy week in the real world! I have completed the officers to go with the trumpeters for the Vistula Lancers and part based them (ready for colours to be applied),  also the first of the men with pointy sticks.So for your delictation. 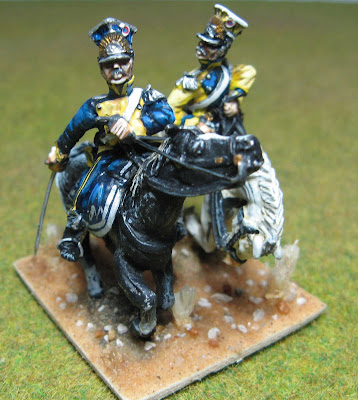 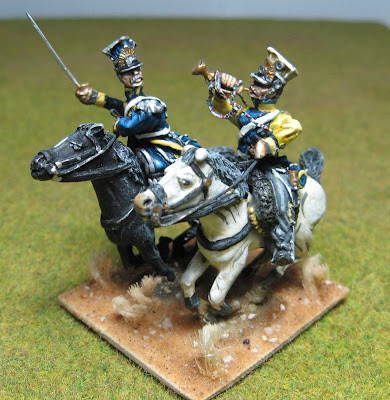 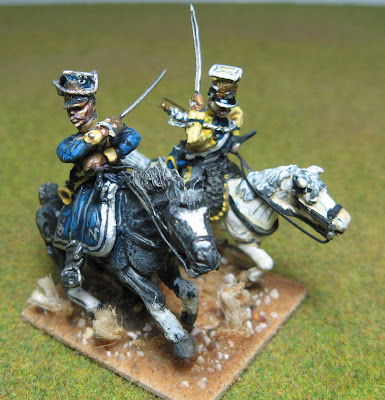 Hacking their way through 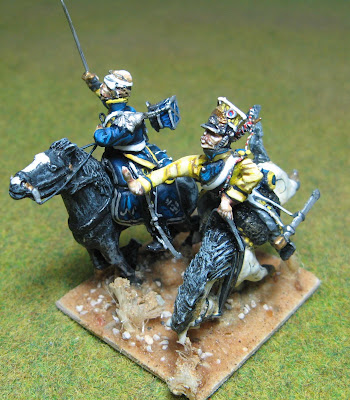 Flying czapka! and crashing trumpter.
"Who's idea was this charge?" 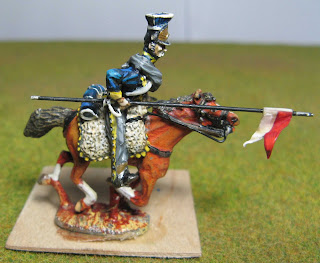 First of the lancers

I have had some different requests come in for the brushes so there may a short delay on finishing these lads while i sort out painting an Anglo Saxon warband! - that's different!
Posted by DaveD at 18:04 2 comments:

Repairs to an old friend "Mamaluke"

While down at the WHC last weekend I picked up a figure I originally converted and painted about 12 years ago. He was in need of a little bit of a refresh and repair as there was some damage to the rear legs and sword. This has all now been sorted out. The figure is a "Bicorne" miniatures one on a Bicorne heavy horse which has had wire reins added & been cut free at the front so it appears to be leaping. 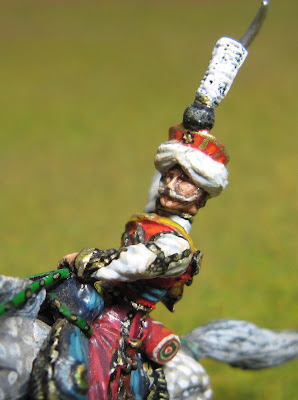 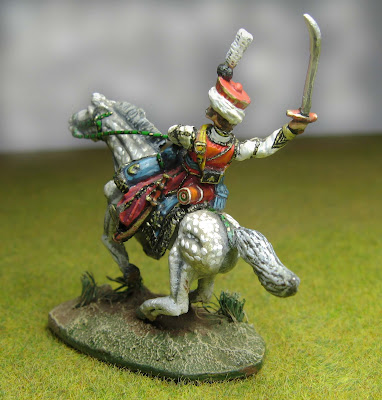 In addition i have completed the trumpeters for the Vistula lancers. All have had extra wire reins added. Trumpets were made for 3 of them from scratch and then added to the converted  figures as required . 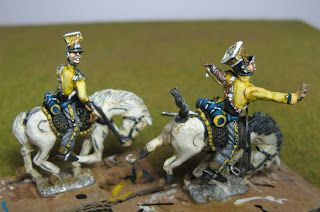 The one on the left is pretty much the standard figure with just the head turned more to its right. The falling one is the same figure and horse. I must thank Doug Mason for the knowledge & teach in of how to do this with the soldering iron (watching him create a splayed out hand just using a soldering iron is incredible)  and the inspiration of looking at his own creations. 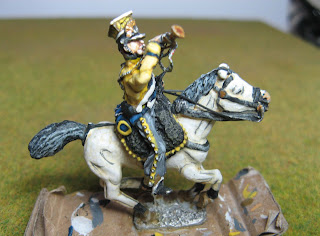 This one had his arm released from the casting , the existing trumpet was cut away and replaced by a scratch one. The head repositioned by twisting, then the trumpet was then soldered to the hand and positioned as if being blown. The the arm is then cut & bent to match it and soldered back on . The cord of the trumpet is created from 3 strands of twisted copper wire from a normal piece of household electrical flex. This is passed around the figure and soldered to the trumpet. 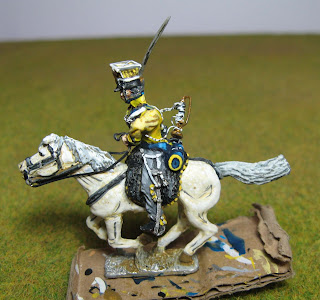 This one has his sword out as if to slash down on some poor infantryman and trumpet flung behind him.


Almost finished the officers too.
Posted by DaveD at 10:34 3 comments: