I have finished up the remaining mounted troops for the Mahdists that were in the lead pile. This consisted of 12 Baggara Cavalry , and 12 rifle armed Beja camel riders - both lots by Perry. This take the total mounted force to 80 figures altogether  - not far of the original intent of 100. I might go for 50 Baggara , and 75 camels.

The lead pile for the Sudan is steadily shrinking  -  may need a top up!

Next up some Indian army or Sudanese I think..
Posted by DaveD at 11:57 26 comments:

Sudan - The new game display stand, and a thank you.

I am taking the Sudan game to the "Muster on the Parade Ground" show at Stockon on Tees on the 9th of July. I have recently add a display banner for it.It is A4 size pull up . I thought the Mahdi would make a good picture to use. So here it is - sourced from Display Signs Direct 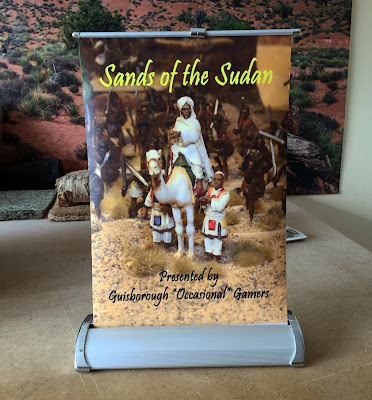 And while mooching around on e-bay looking for something I came across a replica Sun Hat /Pith helmet for the period too - maybe I will make the column commander wear it! 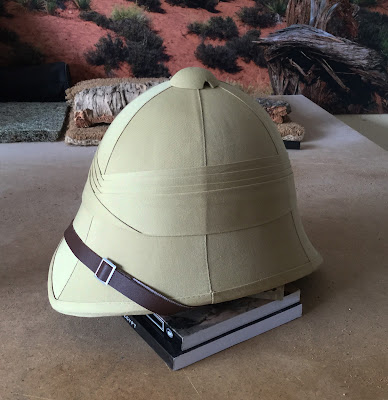 I may have to tea stain it bit more to give a more lived in appearance.

I also recieved a parcel from that fine chap Gary Amos (Happy Valley) of Sudan related books found while clearing his loft - donated free to a good home! Thanks Gary , much appreciated and fine additons to the library. 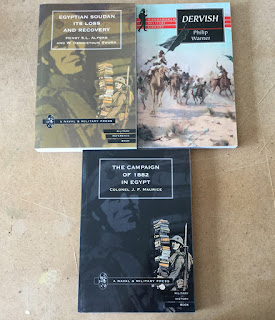 Meanwhile work still continues on extra mounted troops for the Mahdist forces.. more next time
Posted by DaveD at 10:45 20 comments:

This last weekend saw a gathering of gamers from the AMG forum all organised by Graham from Crann Tara Miniatures. The meet up was at the Chesford Grange Hotel in Kenilworth where we would have a private function room for the weekend, and be plied with food and drinks.

I have been using this event deadline to help me push on with the Sudan items which has really helped to move things along.

Over the course of the weekend I ran 4 games for 15 people. All went very well , with some almost nail biting action . The Imperial forces were tasked with relieving the Egyptian Garrison - and of course rescuing  the Generals wife and daughter - who just happen to be trapped in the village too. 16 turns were set as the target before the garrison would surrender.

Is that the relief column in the distance? They seem a long way off... 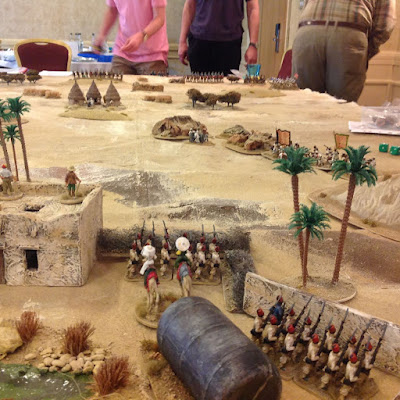 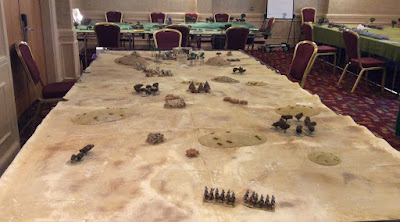 The scene is set ...the lead scouts are on the table , now where are the Mahdists hiding ? 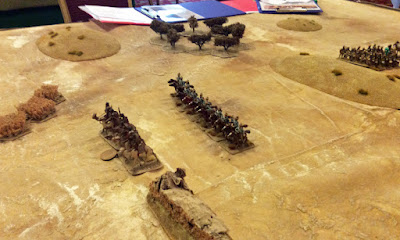 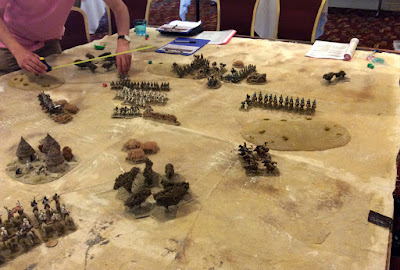 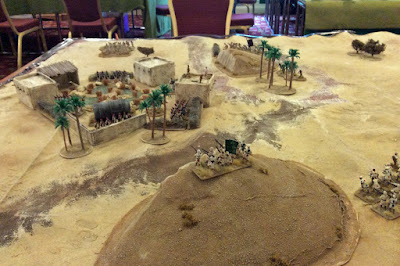 Mahdist marksman start to take pot shots at the village - heads down lads. The first Mahdist assault heads for the North side of the village. Rapid fire time lads! 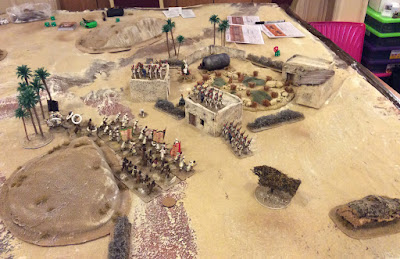 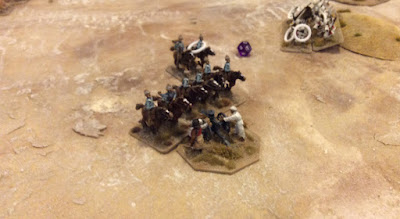 Now where did they get hold of a Gatling gun! The Mahdists threw the best result they could possible do to unseat a large number of hussars before they were cut down! ouch... 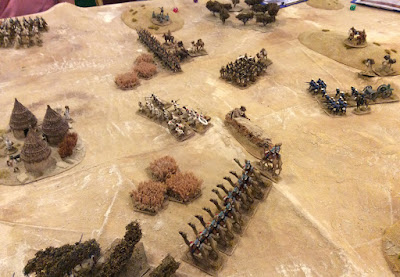 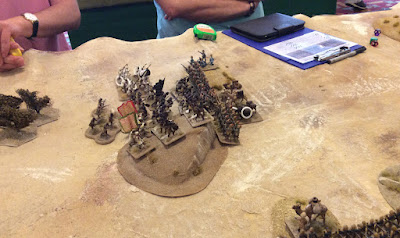 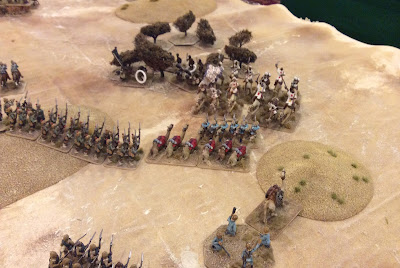 The camel corps dismount and give the Mahdists a volley! - see em off! 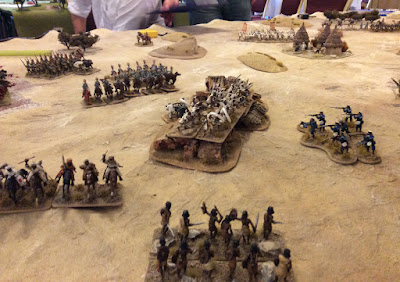 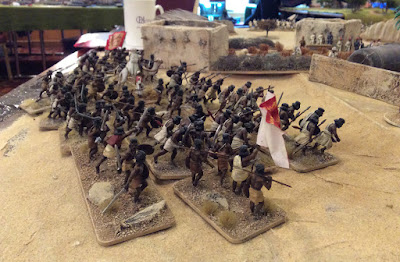 Its the Mahdi! and a whole howling mob in support!

At this the garrison having seen off an assault from the other side , decided that column was taking long - and being down to the last few rounds decided to break out and head up table. 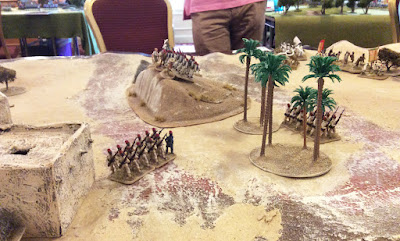 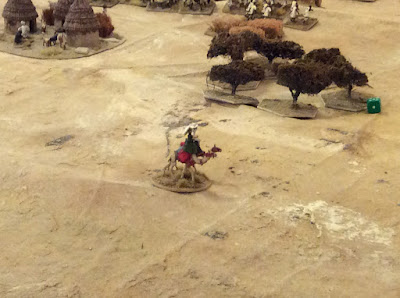 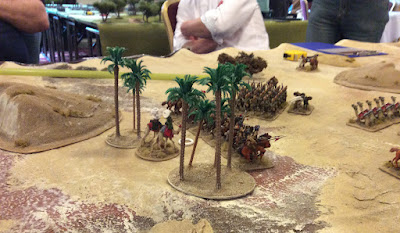 They was soon being escorted to safety by a squadron of Bengal Lancers.

Overall this is an amalgam of 4 games over the weekend - all were very close - with the results swung by one or two dice rolls , or the turn of a card. The look on the Hussar commanders face when the Gatling dropped half his squadron with the best possible roll they could make - priceless.

I had changed the ambush rules - and these are now fully card driven - with two blank cards to one ambush card in the deck - plus a few other random events as well. It worked well. One game turned up mahdsists at every piece of terrain at the beginning - which really slowed them - another made rapid progress as no mahdists were uncovered until half way across the table - but in both the paranoia was enough! Game 3 - Aly Morrison could not hit a barn door with the Egyptians.. they fell to a man... but the ladies escaped - just! And the decision making of do they chase off the "caravan" who only wanted to sell a few pieces of fruit , - or dirty postcards - but who are slowing the column down , but if you do it might annoy the natives (it did 600 appeared! )- great fun.

I decided to run charges as simultaneous,not i go u go, that worked well. I allowed a foot unit adjacent to the water carrier to do double move  march - at expense of using water - but with a caveat of if it ran out the column would suffer heat casualties (of course just when it might run out was only known by me,,,)  Some gambled - some did not.


The games were all played in a great spirit with much ribbing of the column commanders by the besieged garrison!

Overall a great weekend away.. 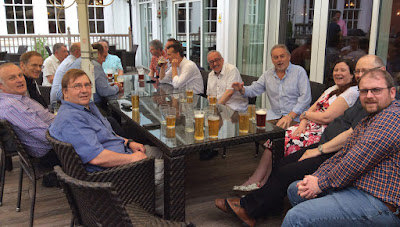 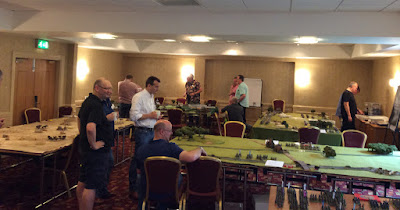