Sudan - Bit more work to do

I have been doing a bit of an audit of the Sudan collection to go through and decide what I want to do with it next in terms of adding units and there is bit of project coming up too (more later) that requires some specific items. I took the opportunity for some new photographs while they were on the table. I need a much bigger table! 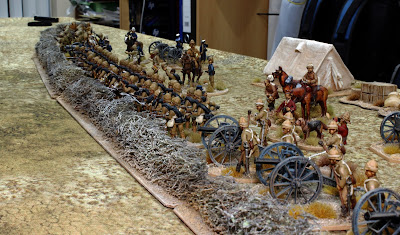 I have around another 200 mahdist foot to add .. the build is under way at the moment

Where the hell has this year gone, I find myself asking. It’s been busy hobby wise as well as real life. I have had a few weeks recovery time post the Utah Beach game and am gradually getting back into the model making/painting saddle.

The first half of the year has seen some great gaming, with the guys from The Old Guard  providing some great times. We continue to not take things too seriously which suits me.

The second big run out of the Sudan game went really well. Plans are afoot for the next one. I also have some bits for this planned in the winter painting season. The collection will then I think be up for sale.

The Battle of Britain campaign with Pete is over halfway through. We will pick this up again the autumn. Meanwhile for the summer Pete has invited me over to his to try “spear chucking” with his ancients .. well as long as I get some Romans with catapults and ballista’s..! Sure it will be fun.

The Normandy 44 project still sees the main focus . There was a hell of a lot of work went into the Utah game , but it really delivered . I have a number of blog posts to catch up with for it. I have also been stocking up on more items for the autumn and winter for this. My US forces are coming on nicely - but nowhere near finished.  I have sourced a load of extra Tiger Terrain Normandy buildings to augment the ones I already have.. really looking forward to doing these as they look the biz .

The sourcing of a decent hot wire cutter has opened up a whole new front on terrain building. I also have my eye on 3D resin printer.

Currently the paint desk has some Napoleonics (for Jason) on it .. nice to do something old school and different.