We played out the rest of our game last night . The Americans had a tough time of it at the start as they had attacked with only a few platoons that were unsupported . The Germans while heavily outnumbered were able to make local fire superiority count and keep the paras at a distance . This time the Americans would be better co-ordinated and were also able to secure some extra artillery  assets

The village centre was being well pounded , gradually eroding German strength . The Pak40 covering the bridge was leading a charmed life along with its neighbouring HMG team covering the causeway 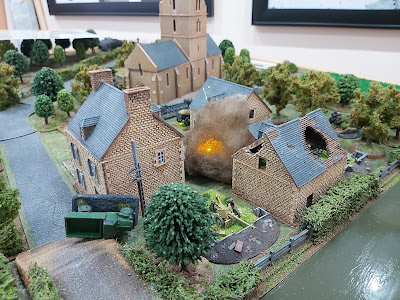 A para platoon had worked its way only the road taking cover in ditches to the side on the bridge approach. They were halted by a mixed minefield ...but had the skill to deal with while under artillery fire. 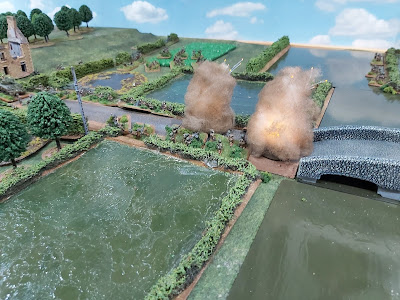 The platoon that had been caught in the flooded section , held itself together and pushed on forward - rattling the German defenders who were shooting badly . 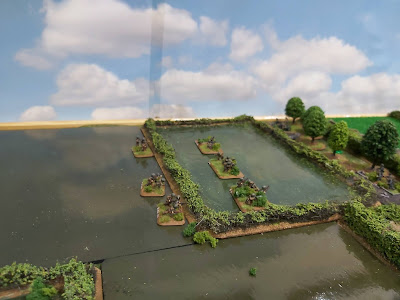 They pushed on through to assault the defenders 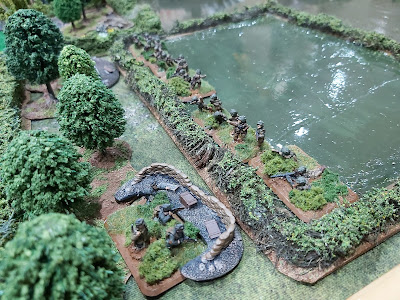 A smoke screen was laid in front of the village defenders while he platoon crossed the bridge taking advantage of the fact that one of covering HMGs had finally been dealt with by artillery. Batteries of Long Tom 155’s were being called in on the rear of the village and church which finally knocked out the German OP and shut down the defending artillery 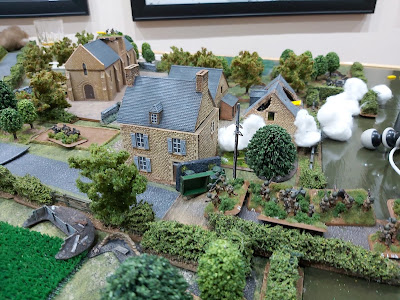 The paras were soon dealing with bridge defenders and dispatched the gun crew manning thee Pak , and cleared the house at the bridge end. 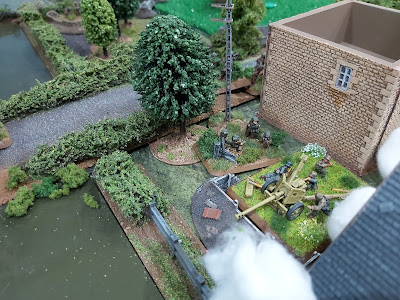 The US ATG’s had been set up blasting away at the river defenders and the tanks were ready roll as soon as the Pak was dealt with . 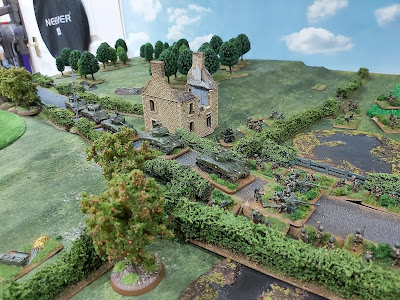 The tanks were soon over the bridge - the Germans could not hold them any longer . 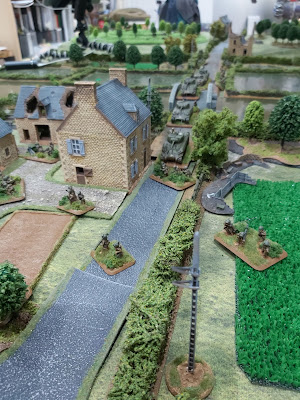 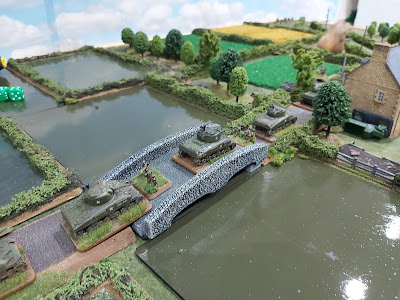 It had been a good game . The American paras quality told in the end . A more co-ordinated attack - and a realisation that the causeway was actually a lot quicker to move on  -albeit risky - finally cracked the position . The potential German reinforcements didn’t turn up either - a German tank or two might have swayed this still .
Time to think up a new scenario.
Posted by DaveD at 07:43 3 comments:

We played the opening 4 moves of our zoom game tonight. Opening bombardment plastering the far side of the river doing some damage to the defending units . 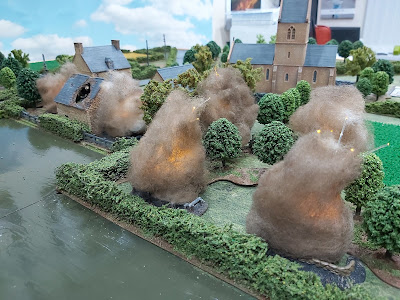 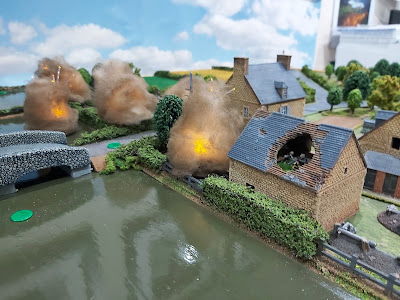 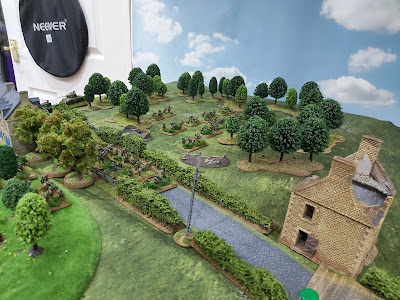 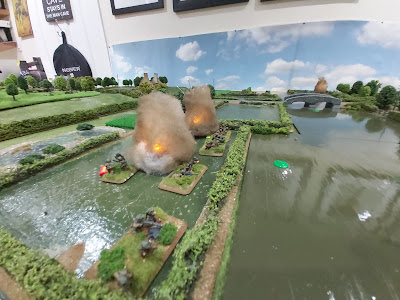 The German OP in the church is coming under some artillery fire at last - but its still surviving. 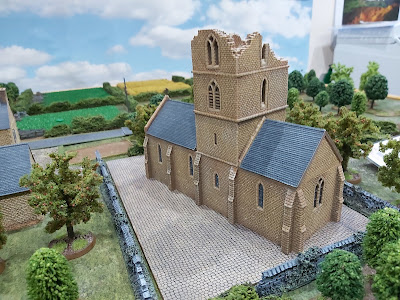 HMG team that survived the bombardment - unleash a hail of fire at the platoons trying to ford the river..
American artillery and mortars continue to land in village , ,the units are dug in deep though. 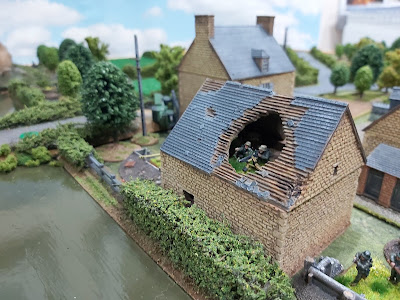 the German arilttery arrives again.,catching 3rd platoon struggling through deep water ... it looks like Fox company is going to need some help... 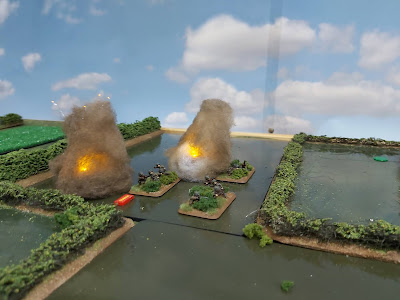 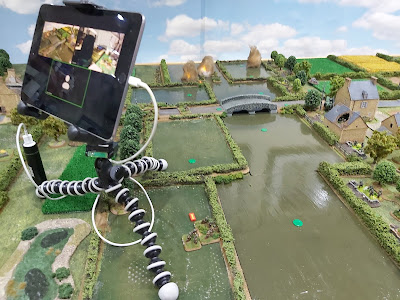 Gaming - Normandy 44 - Battles on the Merderet. and an update.

With the Covid rates around my area having increased my local group find ourselves back under a version of lockdown where we can’t meet face to face. So it’s time to set up another Zoom game. This one is back to Normandy 44 with an early battle west of St Mere L’Eglise With a US paratroop unit attacking across the difficult terrain of the flooded Merderet river to capture a bridge. We will start playing this week so just the terrain set up for you for now. 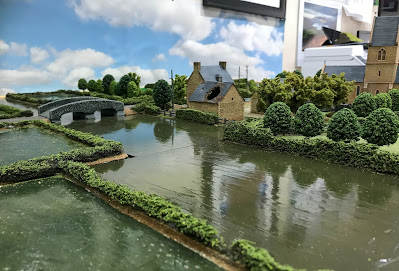 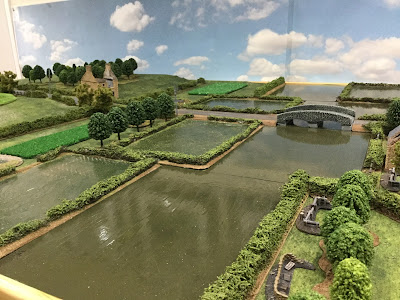 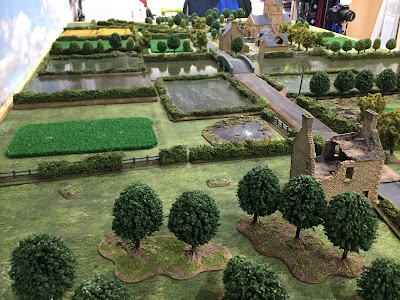 US forces must advance into the flood plain , work out how to cross or use the causeway . Capture the bridge and hold it . 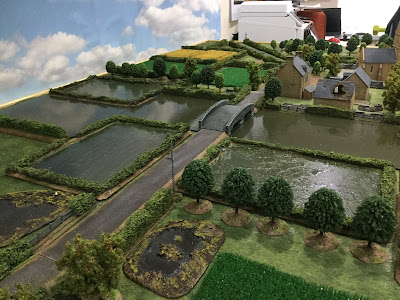 Next up is sorting out the troops.
I have been clearing out terrain stuff and have just about completed work on another 24 feet of hedge - taking me to 90 feet. This though is a bit more heavy duty bocage with a raised earthen bank . I still need to add some tufts etc - a day making tufts for the winter season is pencilled in for next weekend . 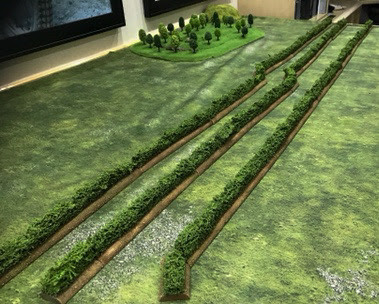 It’s been a while since the last post . The day job involves keeping the world connected through CV19 which has had its challenges  and continues to do so , along with managing to grab an escape on holiday to wonderful part of Scotland . As the dark nights close in its time to up the production- so I am clearing out a bunch of terrain pieces over the coming weeks

First up is a set of larger trees. These are by Busch and are in the height range from 90 to 140 mm and are the largest ones I have suitable for 15mm. That gives me at least 250 trees now. In addition I have some 6mm size conifers that mate Scotty found in his stash and gifted to me . I have started  making  a few large bases of these. Plus I am working my way to a 100 feet of hedging/bocage (66 feet so far)  so I have another 8 foot under way  . This batch will have a higher profile using some D shaped beading as a base . 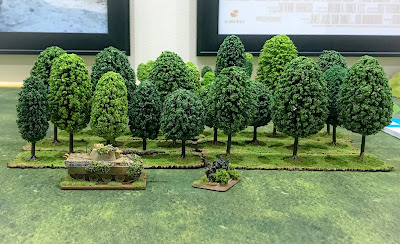 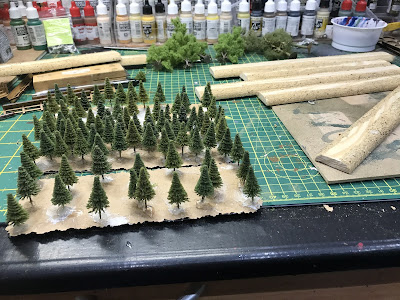 Next up I have more 15mm. Normandy buildings then it will prep for the winter challenge time.