Gaming - “Target for Tonight” board game

I have decided to revisit an older part of my gaming interest - board war games. I have picked up a copy of “Target for Tonight” which is a solo game that sees you running a single aircraft on sorties to bomb the Reich.   I previously owned B17 Queen of the Skies which this is very similar too.. it has a range of individual missions and campaigns to complete . The ultimate being a 30 mission tour.

There are standard rules for Stirling, Halifax and Lancaster bombers , along with optional Wellington and B29 Washington’s . In terms of system it’s very dice driven with little actual personal choice input. It does however allow a narrative to build up with lots of extra details. 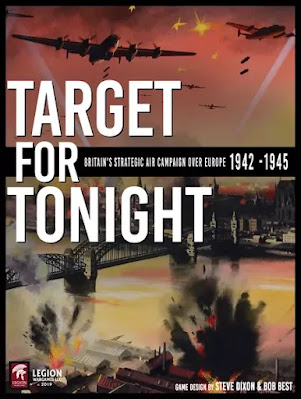 I decided to start at the beginning with campaign #1 “Harris takes over” using a squadron based at one of my local airfields RAF Leeming.
Mission #1 The campaign kicked off 8/9th March 1942 with a fresh novice bomber crew in a new Stirling mk3 . The briefing revealed the target was to be Lubeck. At dusk the bombers hurtled down the runway . MG-A the still un-named aircraft seemed to be struggling with engine number 3 developing a fault and the pilot could not get the fully laden bomber off the ground. It crashed through the runway barriers .. mercifully though it was brought to a halt and nothing more series happened. The plane was handed over to the fitters and is out of action for a few days . The mission does not count toward your totals .
Hardly a great start with some pretty extreme rolling ! But they will fly again.
Mission #2.  12/13th March , the squadron is tasked to Hamburg. This time the heavy bomber gets off the ground with no problems . Its positioned in the middle of the bomber stream at high altitude. As it heads across the North Sea there is an area of 100% cloud to deal with and a collision is avoided. Further across the North Sea toward the enemy coastline the clouds clear.
Tailgunner Sgt Cooke with his sharp night vision suddenly announces fighter 6 o clock low .. and fires his 4 .303 Browings . The bomber had been picked out by a Kamhuber line radar and it had vectored a Do217 night fighter to intercept. The fighter fires and only does superficial wing damage before coming around again to try again , again from 6 o clock but level this time . Sgt Cooke again sees the fighter coming and is on target this time as he follows the stream of tracer toward the fighter  inflicting wing control surface damage. This puts the fighter pilot off his aim and he misses the bomber and breaks off returning to base .
Moving across the coastline toward the target again the bomber attracts the attention of a night fighter .this time a Me110 with a veteran pilot approaching from 6 o clock low . Again Sgt Cooke picks it out of the dark , this time Pilot Thompson  announces he’s corkscrewing the plane to try and avoid the fighter . This throws out the bombers gunners aim which misses. The fighter fires and hits the rear fuselage with minimal damage and then the bomb bay - this luckily only  destroys the bomb aim autopilot . The fighter stays with the bomber coming back around from 12 o clock level . The nose gunner doesn’t see it coming and the fighter   shoots  up the front turret knocking the guns out and then the wireless operators oxygen supply is blown up. The fighter again sticks with bomber , avoiding a close collision as he comes around from the rear again. Sgt Cooke again spots the fighter lets off the quad turret brownings. As he does so cannon shells explode in the turret , somehow he’s unscathed but his guns are wrecked. However the fighter had found his target well and truly with hits across all areas of the bomber as he walk his cannon fire across it . Both wings take superficial damage , then the bomb bay is hit again - this time the cannon fire hits the bombs and there is an almighty  explosion as the full bomb load explodes the Stirling and it’s full crew of 7 is obliterated.
The veteran flier returns to base to paint another bomber downed onto his fuselage.
Well that was eventful and fun . Even after two short missions I find myself drawn into the dialogue and investing in the crew .  A fair bit of page flipping for charts. I have downloaded some other player aids from Boardgamegeek site which helps to streamline things . 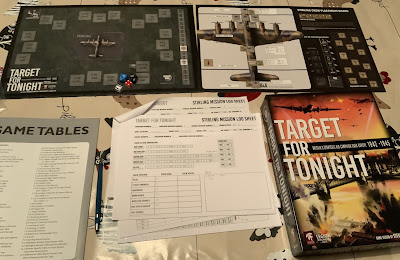 Game laid out with battle board , crew deployment , and records sheets .
More to come -with a new crew