This is a little left field unit to add to the Sudan collection. I found a little line drawing of a bengal lancer mounted on a camel from my 1880's edition of Cassels War in the Sudan. So I thought a small unit of these was a valid project. 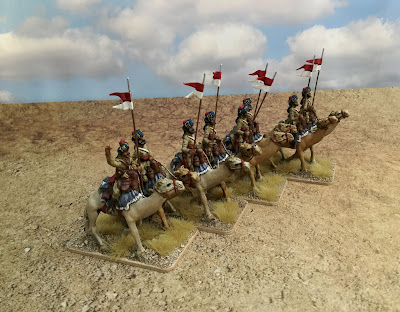 They are a marriage of Bengal Lancer figures and camels from the old connoisseur range sold by Bicorne . I had to do a little work on making the front saddle pommel from milliput , but other than that a fairly simple job. 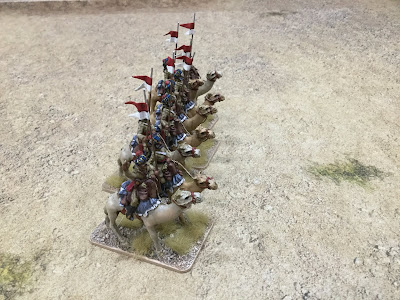 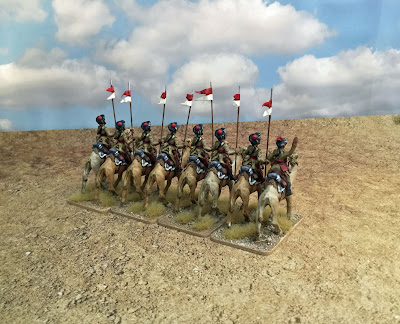 Next I picked up a pack of Foundry figures at Hammerhead - these were for AZW , they  just needed a little bit of work to file of the cuff details -

I am back on to ww2 stuff coming up as work progresses on a D Day game for June.

Today saw another gathering for the Old Guard Group. This time John had dusted of his 15mm FPW collection and had set up the battle - The Battle of Wörth, also known as the Battle of Reichshoffen or as the Battle of Frœschwiller, refers to the second battle of Wörth, which took place on 6 August 1870 in the opening stages of the FPW. This was played on a 12x6 table using Black Powder with some rule tweaks so firing occurred first , then movement. Plus characteristic changes for superior Prussian gunnery, and better French rifle fire.

The battle saw one French corps vastly outnumbered trying to hold out.. it went to the last turn.. but being outnumbered 3 to one took its toll. MartinC and I were French against JamesM and Peres tuetonic hordes. 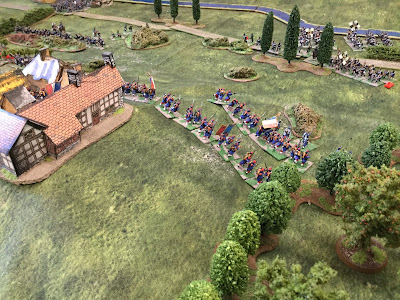 It was a really good game . it ran down to wire- the French just ran out troops and were overwhelmed
Posted by DaveD at 17:45 9 comments:

I have added some more planes to my 1/200th 1940 RAF collection.  These are by Dave at Armaments in Miniatures - and are great little resin casts. Really enjoyed painting these. I have also now sourced a host of acrylic propeller spinners and have started adding these to planes in the collection.


A pair of Boulton Paul Defiants 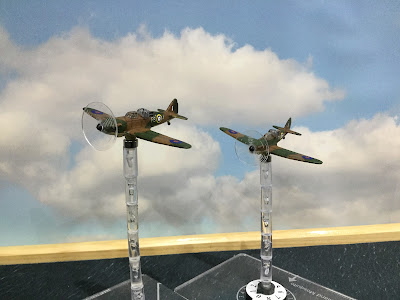 Let’s hope the bandits are behind us! 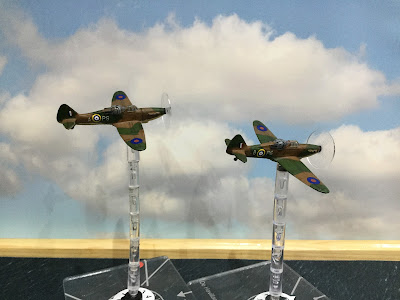 Next up a pair of Fairey Battles 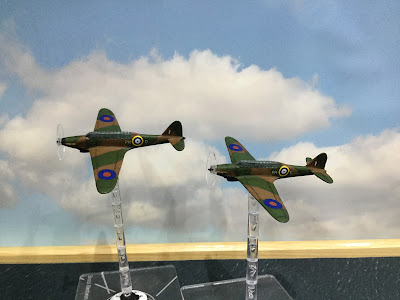 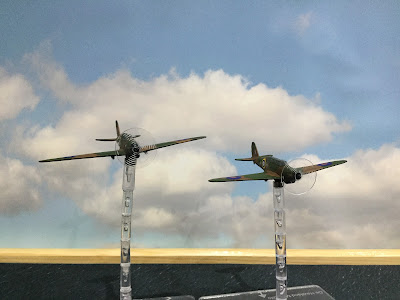 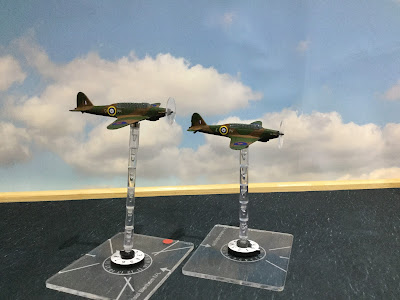 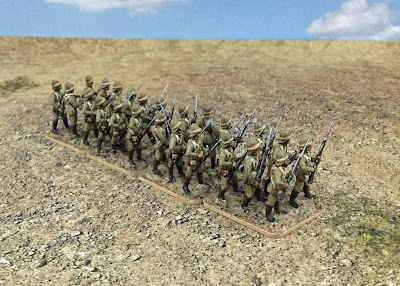 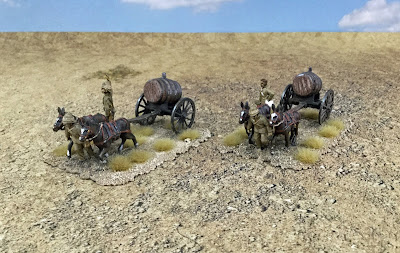 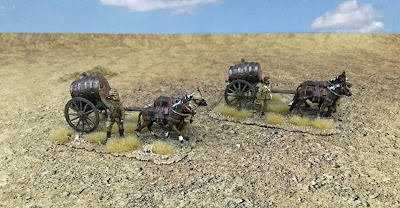 Today saw another couple of games on the campaign ladder . They were cracking!

Game 7
July 25th - The straits are closed in daylight

2 Me109 , 2 Ju87  v 3 Spitfire to defend the convoy
I have some new flight stands and have started adding propellor spinners , plenty more to do.

The Me109 turning circle is proving a problem as they cant get back around tight enough to get at the Spitfires quickly
The Spitfires and AA defence did for both Stuka's , but only after dropping their bombs successfully .  However the Stuka defensive fire had damaged two Spitfires with engine problems and pilot , P.O. Walker found himself bounced by an Me109 as he tried to turn and head home ., he baled out in the channel

Campaign Progress
P.O. Cooke claims 2 Ju87 , celebrates with a victory role over his airfield - gets a dressing down around being spread across the airfield like raspberry jam..if hed' been damaged... yadda , yadda.. Fails a promotion board AGAIN...... and no medals again..campaign XP 10
PO.Walker - damaged a JU87 , shot down, baled out into channel, picked up by an RAF launch - Campaign XP 1
P.O. Anderson - was wounded by a JU87 rear gunner , crash landed on return , 2 minor wounds only , misses two turns - now experienced - Campaign XP 2

Ju87 crew , crash into the channel , and await rescue


Pete has placed his AA guns in the direct path . I decided to hit the deck with Hurricanes and strafe these before the Blenheim's had to pass them . Taking a bit of a chance on the ME109's only getting one pass at the Blenheim's before they could bomb. It worked , the AA was knocked out by the strafing of both Hurricanes , they then turned to climb and try and get back to to deal with the fighters.  F.O. Thompson seemed to be having trouble with his instruments and proceeded to do a wide turn the opposite way to his wing man P.O Wallace , who was also taking AA MG fire from the airfield as well . But the way was clear of big guns for the Blenheim's.

The ME109s , did little damage on their initial pass Novice Blenheim pilot  P.O. Smith dropped his bombs right on target , as did the following P.O. Kelly . The lead aircraft was being peppered by AA MG fire though, and as they turned for home they had to deal with getting away from the ME109's 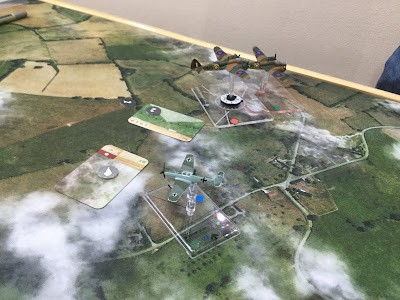 PO Smiths Blenheim was next hit hard by me109 cannon fire , and blew up crashing into the ground. Though the defensive fire had inflicted damage on the ME109s

Things then all went a bit hectic. PO. Wallace was out manoeuvred and took a hammering , he only just "luckily" escaped his cockpit after being initially trapped inside. he floated down on his chute , watching on what happened next..

At this point F.O. Thompson rejoined the fray - his dander was up.. having seen two RAF planes go down. He flew past PO. Kelly toward the lead ME109 , bit fell off it , and down it went... he headed straight to the next one... as it filled his sights he blazed away and down it went too! He turnd for home!

RAF
F.O. Thompson returned home safely after strafing AA guns , and shooting down 2 ME109 - talking up his success secures an immediate promotion to Flight Lt ...no medals though.  Campaign XP 10
P.O. Wallace - again luckily manages to evade capture and is assisted bt the resistance, he steals a boat and makes his way across the channel. he will be having words with Thompson.. Campaign XP 2
PO. Kelly and crew , return home safely
P.O. Smith and crew , all very seriously wounded and captured

LUFTWAFFE
Lt Hans Franz - shot down, baled out , rescued by infantry unit  , severe wounds , horrible scars , miss two turns - Campaign XP 4
Lt Helmut Stienberger , shoots down a Hurricane & Blenheim . Shot down , bales out , no injuries , feted by the commander of a panzer unit .  Campaign XP13 - fails promotion, and no extra medals this time - well they didn't stop the airfield being hammered I guess!

These were both brilliant games , hard fought - both of which we ended up surprised by who won !
Posted by DaveD at 21:24 6 comments:

Gaming - Hammerhead - a good day out

A bunch of The Old Guard were at Hammerhead yesterday , enjoying a show with a good atmosphere and decent shopping too. MartinC , JamesM and I  had travelled on Friday to make a weekend of it , Pete and John joined us early on Saturday.We spent Friday night over beer and curry chatting through some future planned games , and then looking at a combined project. This will be 1967 Arab Israeli war done in 3mm over a very large table so we will do big battles on a larger scale .

James took time to go round and take pictures of all the games which he has posted here. There were some good looking games. Martins write up is here

We played 7 games of our Pulp game - Pyramid of Doom. Most of the participants were young future gamers who had a good time charging around. The mission was accomplished on all games .

We had a lot of positive comments re how good the table looked , which was good. its always one of our criteria for a good game. 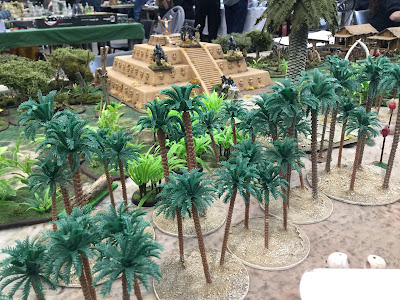 The stash sourced was good . I picked up stuff mainly to help with storage wars and extra stuff for the Normandy project.

All in all a great weekend.