The big project for next year for me is get a good sized 15mm Normandy game up and running - as in 16 x 6 . I am doing the US forces who fought in bocage country so I am going to need a lot of hedges.  I made 12 feet a few month back for a game with the guys , but decided this has to be an occasional task to make sure we have enough - and you must know the mantra - you always need more hedges!

I thought I would take the opportunity to show how I do it.


Small sizes are of course available from a range of suppliers ..just expect to pay a premium for it

Today saw the guys have a game at the Battleground show, well in between shopping and mooching around .

John has set up the game based on Pickett’s charge. We were using Black Powder which if I am honest are not a favourite , a bit meh for me .. but it was a least simple.

Some limited pics of the battle and show as ended up,with iPad issues due to new software update! But now seem to be sorted. 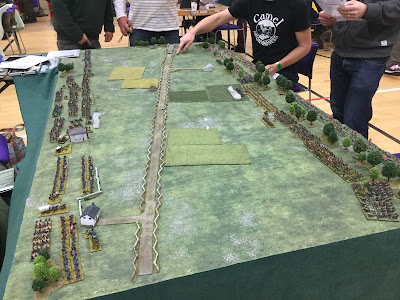 Union on the right , sitting waiting the Reb advance 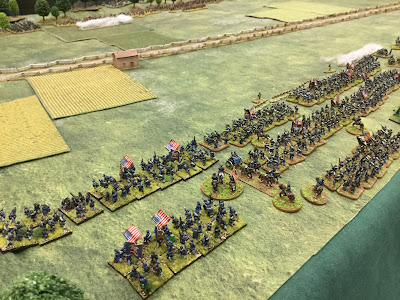 My newly painted stuff awaits its fate! It did alright in the end .. 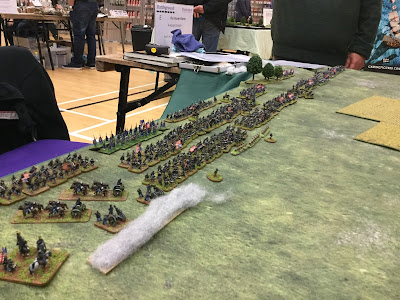 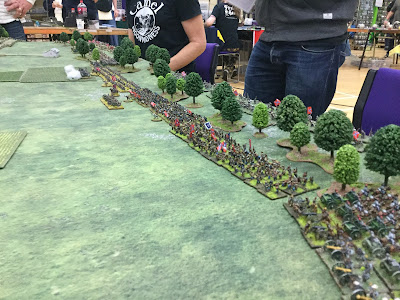 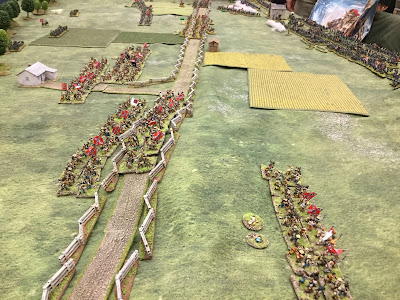 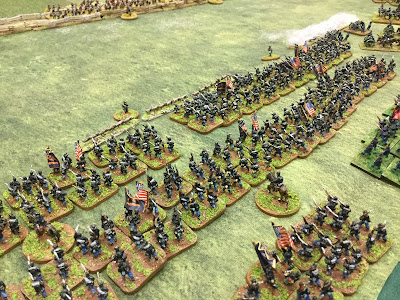 Shopping was minimal, but the others seemed to have a reasonable top up  . I got some resin bits for market stores, barrels n boxes from Ainsty, a pack of south sea islanders for the Hammerhead game and few Vallejo green colours that I was running low on . I also picked up some pre order !0mm Confederate ACW packs from Pendraken to boost the 10mm lead hillock up. It seemed a good busy day overall.  It’s great to see this show doing well.

ACW - Top up for the Battleground show game

This coming weekend sees the Battleground show at Stockton on Tees. This show has been revamped by the guys at Pendraken and its really on the up I think with a good range of traders, display and participation games on offer. I am pretty topped up with stuff , but you never know what I may find - the bring and buy was very good .

I am attending with the guys from the Old Guard group and we are putting on 10mm American Civil War game based on day 3 of Gettysburg. Its always handy having a deadline so I have been working through most of the remaining lead pile that I originally purchased last year. I have completed the first lot of limbers for Confederate artillery plus another Union brigade. In fact I have finished these quicker then anticipated so have started on some more Union guns and casualty markers will be done in time for the weekend too. The 10mm lead mountain is looking more like a small hill now - I do though have some on order to pick up this weekend.


The 10mm ACW collection is based for Fire and Fury. I have added a further 31 infantry stands and 6 command , plus some brave colonels , and range of mounted commanders 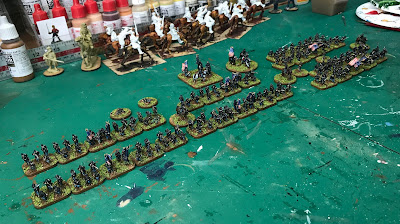 My union infantry altogether is around 80 stands - so its growing nicely. One more decent sized  brigade should do it for me - then I can do some of the unusual units like zouaves etc.  With the guns under way I will 9 in total. I will need some limbers and few small cavalry units to finish it off

My Confederate forces have 3o infantry stands and 15 guns (don't ask!) and the next real work here will be another 2 infantry brigades- one of these will go the Chris the painter at Marching in Colour to help me move this along.

In addition I have also built up the Really Useful box inserts I picked up at Partizan from Sally 4th -they have had ferro-sheet added. So for the basing of this latest lot of ACW I added some 3mm magnets -I will need to go back over the existing stuff at some point as I revamp the storage.

As John from the Old Guard has also been busy adding in a decent amount of Confederates the game should look good with a decent troop density - and with all the new stuff a lot should be running away! any way I  will try and get plenty of pictures

WIP - Back to the brushes

I have finally got some brush time in. I have a game coming up at the Battleground show with the Old Guard group. We are getting the ACW stuff out again - so I am topping up the Union infantry with another 30 or so stands , and doing 6 limbers for my Confederates.

I am working on clearing out some other long term paint desk squatters as well to clear the decks prior to the AHPC winter challenge.  Some tanks, bash bazooka and unit a of Naploeonics need clearing out by Xmas .


Martin, James and I are down to run a game at Hammerhead and it looks like we are going Pulp style to recreate "Tales of the Gold Monkey" 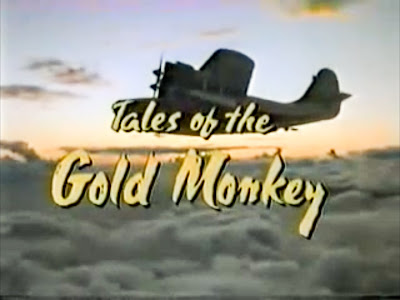 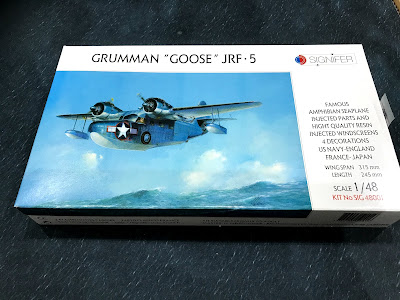 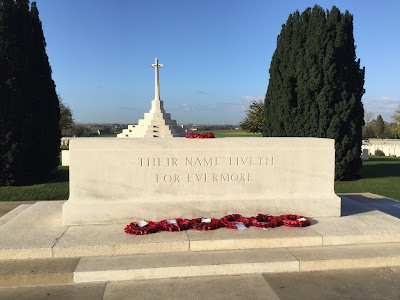 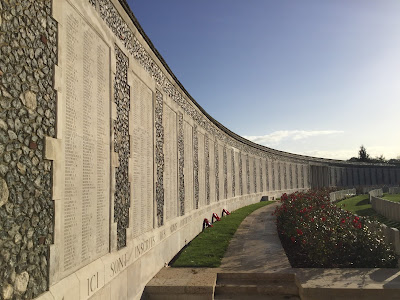 Email ThisBlogThis!Share to TwitterShare to FacebookShare to Pinterest
Labels: rememberance

I made a recent family history discovery on the paternal side. I now have a Canada connection with some family members in Canada . I made contact with Jean a cousin of my father living near Toronto who has kindly passed on all the original records she has for her uncle Thomas McQuater. We don't think any member of the family has specifically visited his grave. Although I have been to the actual cemetery several years ago without being aware of the family connection.

With the centenary of the end of first war approaching myself and Mrs D had decided to make another visit over to Ypres and Menin Gate. I also wanted to make sure we paid our respects to Thomas and we diverted to the Vimy Ridge area to visit his war grave in one of the smaller cemeteries in the area. He rests in an original battlefield plot and was not moved as part of the concentration of graves after the war.

With the 100th anniversary of the WW1 it seems appropriate to remember all those effected. 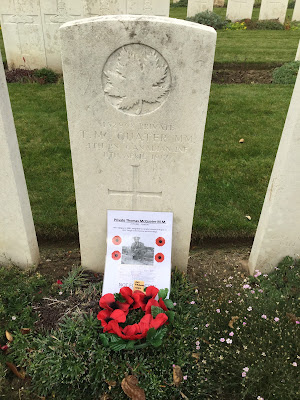 Thomas was born in Glasgow and emigrated to Canada before the first world war. He joined up in 1915 and ended up in the 4th Infantry. He fought in the battle of the Somme , being awarded a Military Medal for being the last man manning his Lewis gun in a series of attacks and counteracts near Courcellette in September 1916. 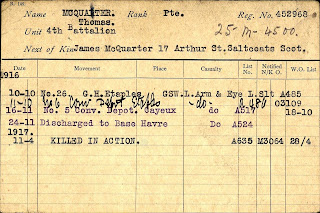 He recovered to take part in the Vimy Ridge attack in April 1917 where he was killed in action on the third day of the attack, possibly even by friendly fire according to war diary. 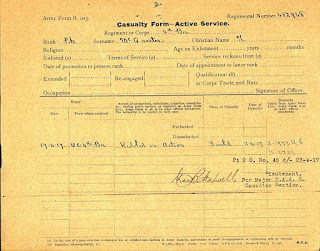 We called in at the Vimy Ridge memorial. 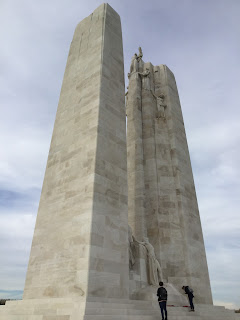 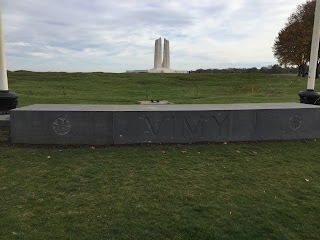 For the evening we attended the Menin Gate for the Last Post Ceremony . The haunting sound of the bugles playing under the archway always has an impact when I hear it. 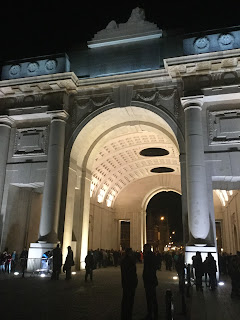 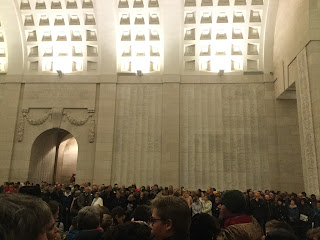 Annoyingly my small planned shopping list was disrupted with some trader drop outs. so purchases from  Flag Dude , Tiny wargames and Ainsty were out.. A point to be fed back too TSOA,  but I am sure there is a reasonable explanation. . So I went a bit off list .

This piece has now led to the sourcing of a1/48th Grumman Goose seaplane.


"Tales of the Gold Monkey " on some South Pacific Islands here we come ..

next up more terrain items - lots of MDF 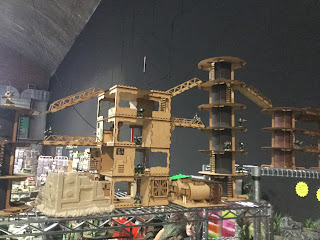 This stuff was on a cracking show discount to make up the above set up (by products for  wargamers .. whose old west buildings I have some of. ) ...bit of Necromunda coming up with the lads I think 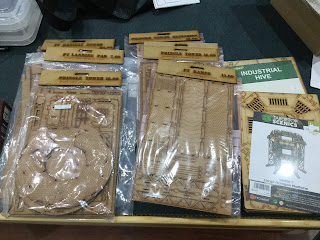 Plus some other bits 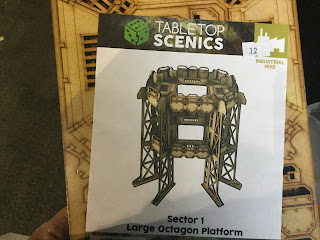 I picked up another FW190 for Wings of War. Stefan Ko donated me a model of Lawrence of Arabia form the Tactica show - thanks Stefan . 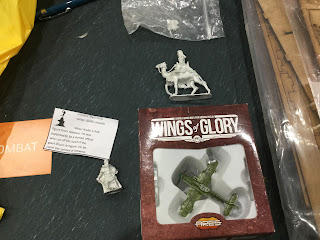