the Spanish Inquisition. Time for a little bit of light relief and a few just for the fun of it figures. Now you will need to be of a least a certain age to have seen these characters on "Monty Python" 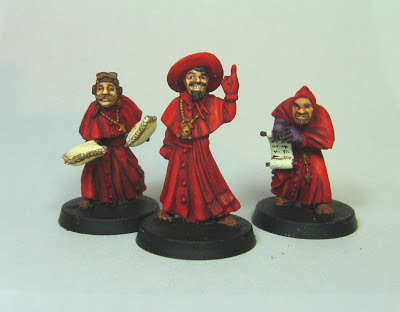 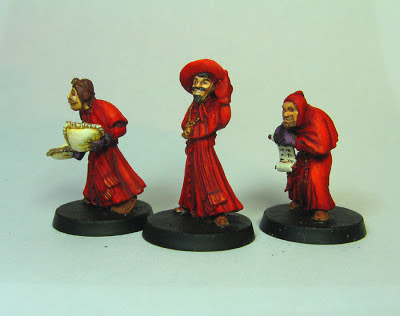 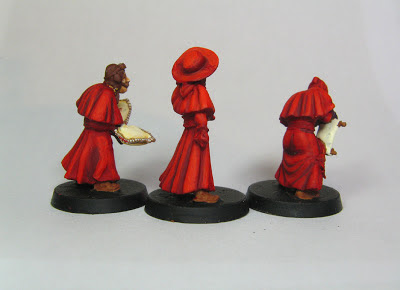 If you have not seen the silliness before then here's the video.

The figures are by Victoria Miniatures from Australia - wonderfully sculpted and cast if a bit on the expensive side.

Sometimes you just need a bit of silliness!
Posted by DaveD at 11:52 20 comments:

Wishing you all a very Merry Christmas and a  Happy, healthy and prosperous New Year. May your paints never dry , and dice roll high.

I would also like to say a special thank you to all my regular visitors and contributors - The blog has passed 50,000 hits this week ,another milestone.

Next year will see the continuation of some existing projects and the shifting of a few backlogged items. The Cowboys will have some additons no doubt. as it will be a given a run out each week in a continuing campaign - check out the seperate page "Trouble in Serenity Territory".  The Sudan will be back with an aim to actually get it to a battleworthy state later in the year. I seem to have a found another distraction inspired by Boardwalk Empire - the Gangsters which will use a mix of Pulp figures and "Mad Dogs With Guns" rulset. There will be specialist Napoleonics with a number of converted units in the wings at the moment. Hopefully I will be able to meet up with some of you once more at Salute 2013 for "shineybloodyitis"- the hotel is already booked.

Wishing you the very best. Cheers Dave
Posted by DaveD at 18:53 15 comments:

The sharp crack of a rifle shot rang out across the streets of Serenity.  That troublemaker McCoy the leader of the "Wild Gang"  was back in town with some new recruits. An argument with the rival "Outlaw" gang had resulted in gun play - the onlookers were stunned with an opening  "FATAL GUTSHOT" the "Outlaw" victim laid sprawled across the street.  What had been a quiet day looked set to get very hot!

More shooting broke out across the streets as the two gangs worked out where their enemies were and the lead began to fly. Further down the town the Sheriff and Deputy were wondering where the town Marshal had gone to and when he would appear.

We started with a complete random set up with figures being placed in order of the card being drawn  until the joker appeared. Characters who were not initially placed then appeared in play as their card turned up -a dice being thrown to see from which building they would  emerge from. There were other random elements with the train and stage maybe making an appearance as well.

McCoy took himself off to the W Kidd's  gun shop and negotiated a deal on a large calibre weapon , a manstopper.

Some of the "Wild Gang" at the far end of town were looking to make a move to help their friends , but would have to get past the Sherrif at the jail, and Deputy Daniels with his street howitzer up on the town gallows. The "Wild Gang" boys took cover and started blazing away at the lawmen - to little effect - a few shots just passing through the Sheriffs hat. Marshal Wyatt Earp turned up - he had been asleep in the jail - he emerged from the building and marched out fearlessly - as you do with a some spare action cards! He closed the range and felled one of the "Wild Gang", but the "click" on an empty chamber caused him to think twice, he reloaded and retreated back towards the jail. 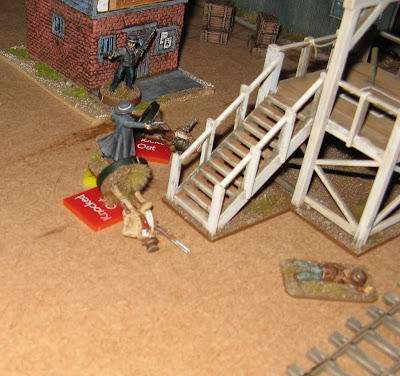 McCoy seeing the action over by the jail set off with his manstopper to deal with the law dogs. He let off a shot which felled Daniels up on the gallows. The lawmen men turned to face him as the turn ended . Who would go first next turn? The Legend card came out waiting to be claimed, Wyatt claimed it and moved forward and shot at McCoy but NO!  that "click" and a gun jam. There was nothing else to do but grab the barrel of his pistol and head towards McCoy give him a good pistol whipping. McCoy's nerve held and a tough hand to hand brawl broke out with Earp and McCoy laying into each. Wyatt overcame McCoy leaving him knocked out on the floor beaten & bloodied. Wyatt his head spinning from the effort and holding his ribs drew breath. 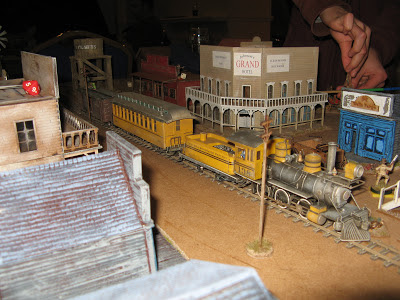 Saunders fired into the remains of the melee - missing but again running out of ammo - he played an action card  and decided to throw his considerable bulk at the Marshal. Wyatt drew breath and swung at the charging bull of a man bearing down on him - the blow connected with his head and down Saunders crashed.

All this time the "Outlaws" took advantage of the trouble and snuck into the bank. At the point of the gun they relieved the safe of a number of bags of loot. One of the gang was seen hovering around the rear of the next door hotel what was he up to?

The train whistled into town but the driver seeing the mayhem up ahead decided to keep on moving.

With a number of members killed or K.O. the  "Wild Gang" were starting to panic , with some of the members losing their nerves and deciding to high tail it out of town, one leapt into the passing boxcar to take cover.

Dawson the greenhorn of the "Outlaw" gang had been watching the Marshal beat up the "Wild Gang" boys, and thought what better way to achieve fame than to kill a true Legend. He advanced and let fly with his shotgun - with one lone chest fleshwound being enough to knock out the tired Marshal. He thought how cool would it be to hang the semi conscious Marshal? The Sheriff took fright losing his nerve , flinging away his badge , he legged it away from the jail heading out of town. Dawson dragged the semi-conscious form up the steps - would he come round fully in enough time to wake up and try and save himself. Dawson had to pass his nerve checks to do the dastardly deed..Wyatt's fate "hung" on the turn of a card - but it was not to be - Dawson pulled the leaver to release the trapdoor and thud....

At this point McCoy awoke from his beating and seeing the events unfold decided to take a shot at the the "Man Who Killed Wyatt", - Dawson is sure going to be carrying a reputation for his dirty no good cowardly ways. Missing his shot, McCoy slunk off into town tending his wounds.

The outlaw at the back of the Hotel had found some rubbish to set fire to, providing further distraction as the gang made their way out of town - on counting their stash they found $37,500 not a bad pay day. 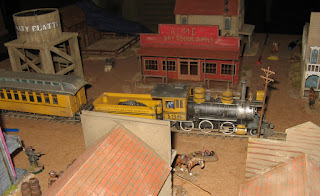 McCoy had to content himself with having seen the demise of the Legend and having the town law run off scared. Maybe pickings would improve around here without the Law.

Phew it was a very tense game - with yet more imaginative thinking leading to some real fun situations. 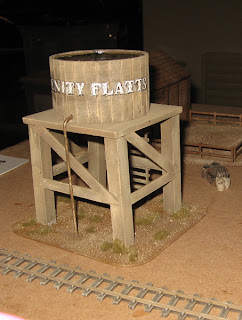 The new scratch built water tower completed by Steve , I did the lettering on transfer paper using an Old West style font.

Well here is a little aircraft recognition test for you. This latest little project is for Gerry over at   The Situation Room . So can you tell your Yak9 from your Lagg3 , your Sturmovick from your PE2. Prize for anyone who can spot the all of the types. The models are by Command Decision Miniatures and all 1/144th scale. 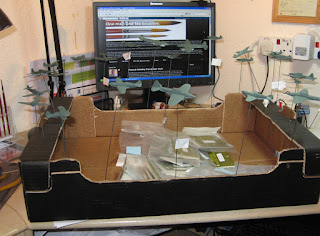 Its been a while since the airbrush has had an outing, so I have made a start on the 25 aircraft with a main

The airbrush I use is an IWATA Eclipse High Precision. Its a double action brush  which means you can control the airflow pressure and the width of the spray with the trigger. Not an easy skill at first , but once you get used to it easy enough. The paint cup is transferable side to side and I also have a range of large pots which I prepare with paint , thinners, cleaner etc  and then just swap over as required. 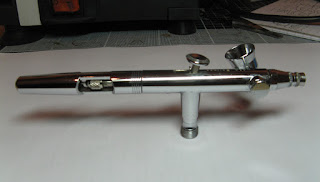 If you are starting out with an airbrush you can choose a single action which give you a fixed spray - something like a Badger 200 a good solid starter. In case you don't know the difference between a spraygun and an airbrush . A spraygun sprays air into which paint is drawn by the airflow externally from the spray nozzle. An Airbrush mixes air and paint within the body of the brush and sprays through the nozzle which means as you can control both paint flow and air pressure you can get a fine line of spray if you want.

Of course if you going in for any large scale work a compressor is essential - and this is mine - it will happily hammer away all afternoon - its fitted with pressure reduction valve as well which gives me extra control to reduce the air into the brush - useful for doing camo!! 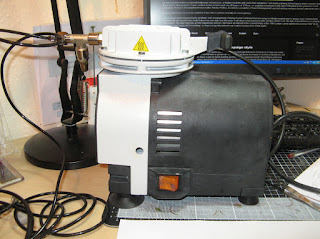 Anyway off to mix more paint
Posted by DaveD at 19:59 8 comments:

Sometimes it seems the old workhorses don't get that much of a look in so here are some plain old PBI lads in greatcoat. You would think these are easier to do then a full uniform, but no there is just as much shading and highlighting required overall. I found these part done when I uncovered the caisson team so seemed like an idea to finish them off. The figures are Front Rank - nice again excellent quality of casting  They do a mix of head dress which adds a bit of variety , and I had turned some heads slightly to break up the completely uniform look. 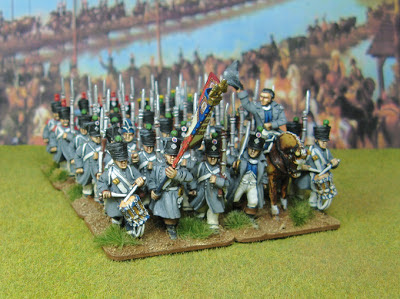 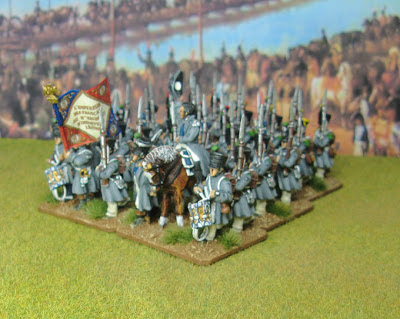 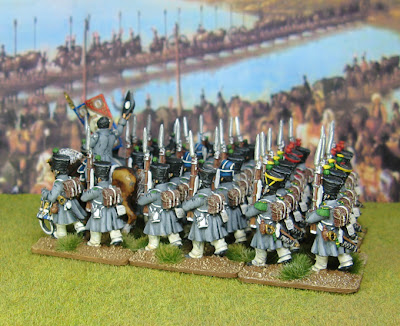 Something a little different up next "The Red Air Force"- to add to Gerry's madness over at The Situation Room - More 10mm soldiers than you can count on a massive playing area.  He's also currently working on building up a Napoleonic force and has taken delivery of 32,000!!! painted figures.

Prep work also continues on items for the The 3rd Annual Analogue Hobbies Painting Challenge run by Curt with talented painters from around the world sharing their work, with a little bit of healthy competition to spur each other on. Looking forward to it - and few good entries planned already. Well done Curt on setting it up again with all the work it entails. Well all those long dark night in Canada you need something to keep you busy right?