That perennial favourite -a bunch of rough & ready matelots, hauling around early MG's for keeping the natives in check. These are the first Imperial troops off the stocks for the Sudan collection. A Gardner and Gatling Gun , both Perry sets. I have based them on an Octagonal base so that they can easily fit into the corner of squares etc. There wasn't much opportunity or need for conversion work here, the only little bit of extras being a pile of spent cartridge cases made out of small gauge brass wire , just cut and fixed with a little superglue. The blues were done using the Andrea Color blue set which I really like using - really easy to highlight and shade with. 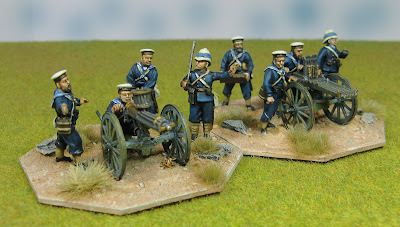 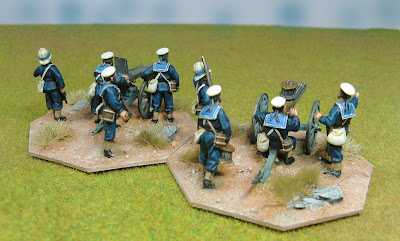 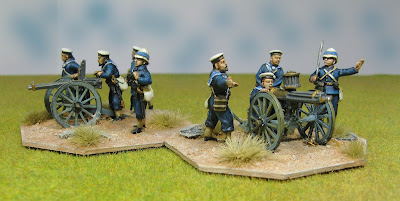 The rest of the artillery is already sourced and the order for the Redvers Bullers 1st Brigade for El-Teb will go in this next week to get some infantry sorted.

In addition I have completed the first lot of preparation work  the Fuzzy force, managing to remove every piece from the sprues in 10 boxes of Perry plastic Ansar and sorted in trays - my fingers were shredded at the end of that. Work has started on the assembly process as well, so may finish a war band this week too.

A couple of specials

Cleared the painting table ready for new projects. A rare (for me) Perry Napoleonic commander Colbert commander of the Dutch Lancers 1815. I had to tweak the figure, it had a lot of flash and cast lines,also  doing some proper cords and rackets for the Czapka, as the moulded ones are stuck down his neck - as if given his pose. Also replaced the sword with something somewhat less chunky - a curved  flattened steel pin, The casualty figure is a Front Rank one , with separate musket  again FR. I also had a play with the Silfur tufts adding a little PVA to the end of some and dusting in fine sand, and colouring for flower or weeds. 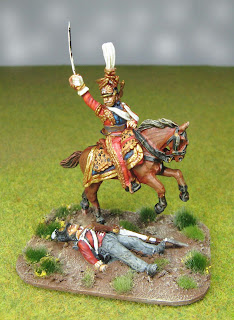 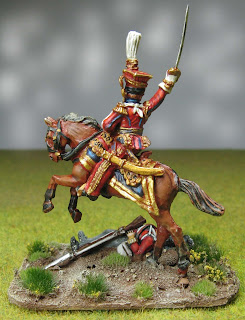 Also completed the casualty eagle bearer for the Mamalukes. 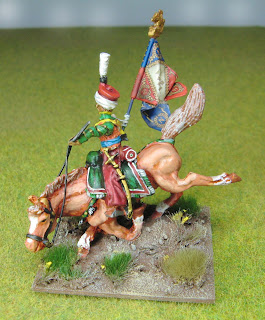 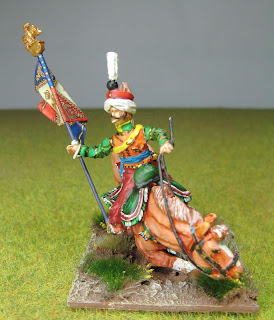 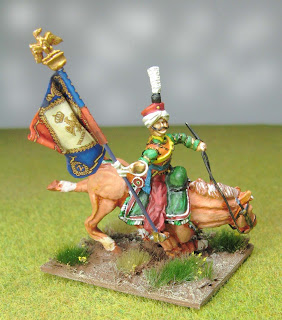 So that is the painting table completely empty for now, work on preparing a big batch of  the Mahdist forces commences next week, as well as a pile of horses for up upcoming cavalry units.
Posted by DaveD at 14:53 11 comments:

what I had intended to paint this week. You know - the butterfly syndrome - but good for the creative process overall. Having bought some shiny new metal at York I decided to paint some of it up, just for the enjoyment of painting. So I present a mixed bag of chaps with a Hollywood connection.. 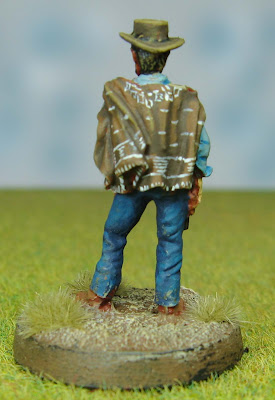 The poncho was fun!
By "Ebob" - right down to the cigar in his mouth - great stuff

"Zulu"
"Empress Miniatures" - the film characters set - I had to have it on in the background while painting.

'If it's a miracle, Colour Sergeant, it's a short chamber Boxer Henry 4.5 calibre miracle'

Lovely to paint really crisp and clean details - even have the medals on Colour Sergeant Bourne's chest!

The desert fort is nearly completed - will be used for Sudan and FFL games - so will have  get these pictured in it!

I have a couple of other single figure specials on the go as well at the moment , then its into serious amounts of Sudan stuff - I have checked figure totals and can now cover the battle of El-Teb at a 1-20 ratio - so that's the target for the end of the summer.  Of course there will Napoleonics as well - the Mamaluke band castings have just turned up too.. choices choices....

The squadron of Mamalukes is now completed. Great fun unit to do, lots of movement and colour achieved which was the aim. I am going to add another one off eagle bearer casuality figure next week as well now I have a proper GMB standard for them. 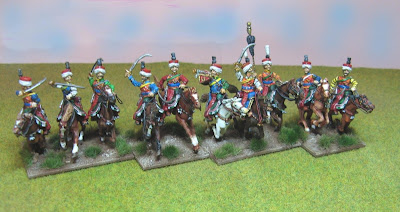 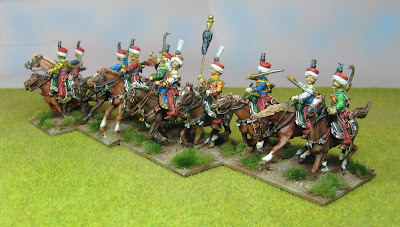 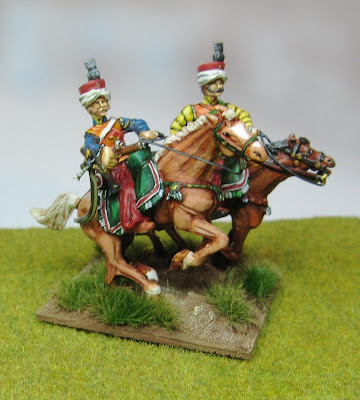 I used a mixture of 4mm Summer & early autumn Silfur grasses , .and was very pleased with the look
Posted by DaveD at 22:30 8 comments:

Again something a little different. Part of the painting challenge is to complete a Viking for Curt. As you might expect I decided to play around with one. This is a Crusader Miniatures figure with an arm removed and replaced with one with a sword - after all you can't have too many weapons can you. The shield had a strap created from flattened wire and attached to the figure. The design on the shield is painted freehand. I also had the order for basing material turn up from Antenocitis Workshop - nice and promptly too, an excellent choice of grasses, cork, pumice ,and slate chippings has now been laid in. 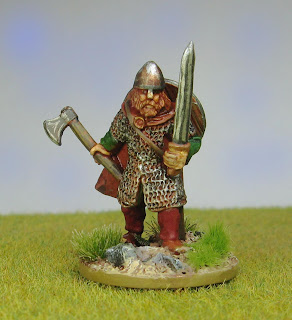 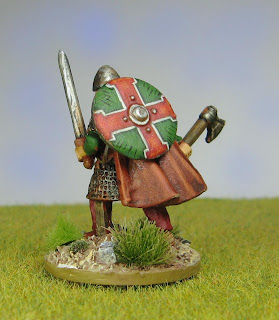 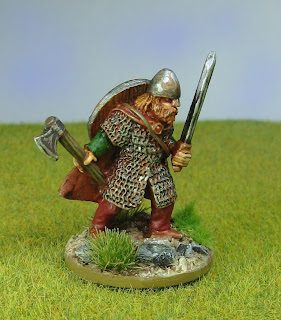 As in bits of this n bits of that. Work continues on the Mamalukes. The new basing material ordered have just turned up so i will be able to finish them this week now. I have however completed a little vignette piece for Curt's Painting challenge. One of the categories is for Best female. I was given this little set which apparently was a give away at Partizan a few years ago sculpted by Matt Bickley . Not sure of the title of it, but I havecalled it "The perils of Pauline" after the old black & white films. A couple of great figures to paint. I now just need to find the dashing hero figure to rescue her!
. 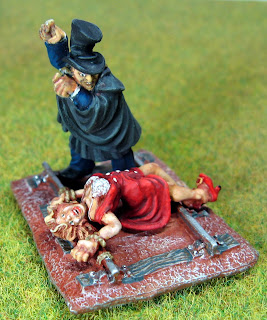 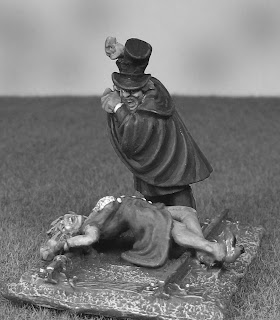 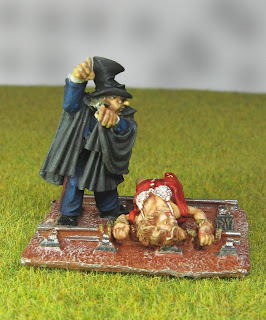 In addition I have been to the York show "Vapnartark" . The first show attended in many years. Nice to see figures in the flesh as it were and i did of course succumb to adding to lead mountain.

The first major order for the Mahdist forces has also arrived - I now have 480 Foot figures , and 25 Mounted to complete - that should look impressive once done.
Posted by DaveD at 11:51 2 comments: