The Other Partizan - The battle part 2 & loot.

As the day progressed the battle grew bigger with more Mahdist forces arriving around the table. 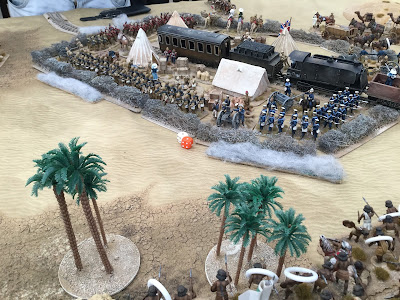 As the sailors crank the handles on their MG's , nothing happens... that damned sand has caused them both to jam ....a roll of "snake eyes" for each one... ouch - it would be left to the infantry and their bayonets by the look of it 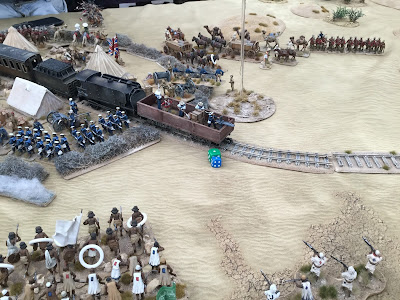 The sailors and the Royal Irish threw everything at them - despite being outnumbered they held the line - great dice roll from Martin hitting with every single melee dice - It was desperate stuff.

Half of the Naval Brigade fall as casualties , but they refuse to give ground... men of iron! There will be medals aplenty here.


It was a cracking game - a real spectacle - I had about 2/3rds of my total Mahdist forces on the table at one point . The game was played in great spirit by the guys. I was pleased with knock up rules overall - the core bits from Victorian Steel worked well for firing and melee. I am looking forward to next run out. There will be much mourning in the clubs of London.. the Guards Camel Regt  have been wiped out.. anyone want to buy some camels ? One careless owner?


And the loot I hear you say?

The Other Partizan -Part 1

This last weekend saw a run down to Newark for the second Partizan event of the year. This time I would be joined by Martin C (28MM heroes blog) and James M (Mad Tin Hatter blog) We had decided to make a weekend of it and went on Saturday and enjoyed  a few beers in the Prince Rupert pub while putting the world to right, followed by a visit to a local curry house.

Sunday saw us out early to set up for another dusting on the Sudan. This time I had another new mat I had made up by Tinywargames. A 12 x 6 mat with a mix of desert and arid design. We were also giving a home brew set of rules using bits from others , and using a chunk of the  Victorian Steel rules as well - I am getting near the simplest set I can for these big games.

We were running a scenario similar to the last one the involved the train, balloon , engineers etc , but I rotated in some units that have note much game time recently. This would see the Camel Corps added to the mix and the 19th Hussars.


Drums can be heard beating across the battlefield !!  what was going on...

If you are going - please pop by and say hi - The Sudan collection will be out in force again with myself and some of the guys from the "Old Guard Wargame" club. We are in the Demonstration zone end at table DG17

The May show was a great one - and I am looking forward to this one too.
Posted by DaveD at 20:03 3 comments:

Tonight saw two firsts - the first actual multi player game in the man cave on the new table. Plus it was the first ACW game. The ACW has become a a group effort for a bunch of us , and with troops and terrain  now being available it was time to chuck some dice .

James , brought over his Confederate Brigade and Steve a Union one - both realy well painted. I had completed another Union infantry giving me two and 3 guns.

We were using Regimental Fire and Fury , with the Union troops being Green and Confederates being trained. We were just testing out the game mechanics for a few turns , and finding out what else bit and bobs we needed to make up - more disorder , damaged gun markers mostly.  I need to finish up some ford pieices , and some bridges - so they have been added to the "to do" list. 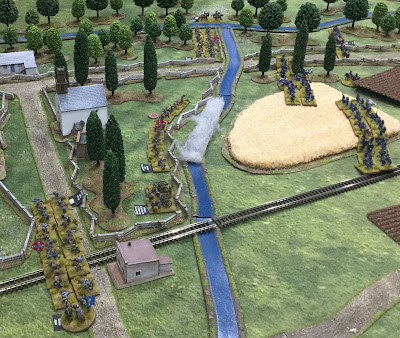 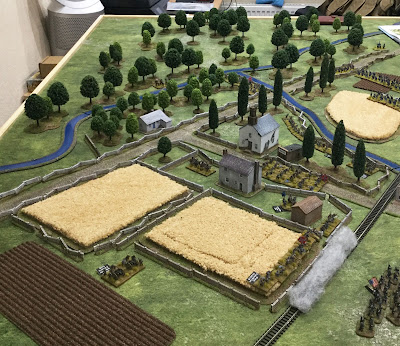 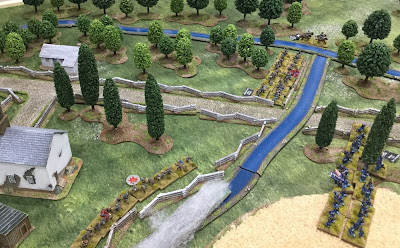 So we played through a few turns , of maneuver, firing and a charge. It felt liked it worked as it should 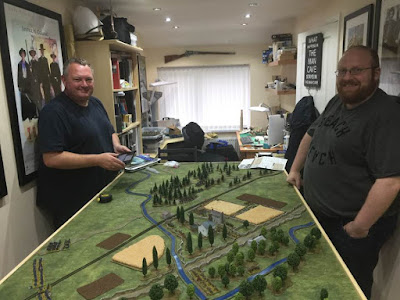 Happy gamers - we even had Martin join us on video "Hangout" to see what he was missing
Great to get things under way - and plans afoot for a longer , more specific scenario driven game
Posted by DaveD at 22:01 22 comments: