This week has been mainly spent working on preparing the next lot of projects. I picked up an old friend at my last visit to the WHC, who has seen much duty over the years. However he has picked up a few war wounds along the way, the horse was broken from its base, his plume was gone, his sword was broken off too. I would swear someone has stood on it!  I asked Doug Mason to repair the horse  with solder from the base to the knee joint of both hind legs. He also created the plume from solder. I was able to sort the sword out re soldering it. I then had to try and match painting that was 30 years old. Mainly used humbrols and a bit of a khaki wash to add a little ageing prior to the gloss varnish. Overall I think he is ready for duty again.

I seems this was an original Peter Gilder creation and still looks great. The base figure is Willie figure I am informed with the head being a PG creation as is the horse (thanks Phil for info) 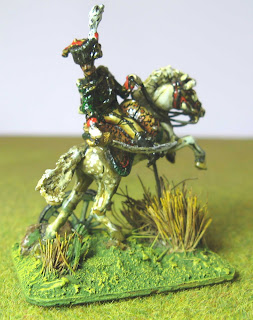 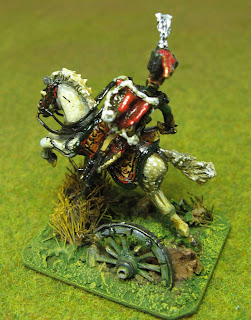 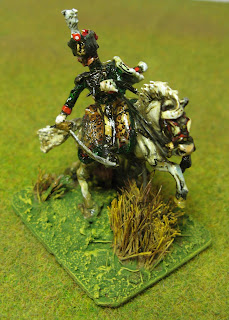 Talking of the WHC. I also found an old photo from 1990. This was the invitation game held on the 175th Anniversary of Waterloo. With Peter Gilder leading the French against Mike Ingham's Brits. I was on the French side and we got a good drubbing! 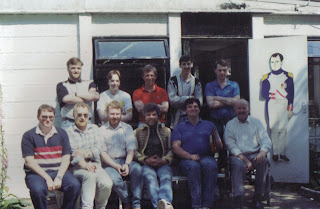 Peter was in a wheelchair at the time suffering with the motor-neurone disease that he succumbed to later that year. I think this was his last game. I was even helping to feed him. I know it was certainly sad seeing him like that. But he enjoyed himself as we all did.


And here are another couple of Vistula legion lancer conversions completed ready for painting. 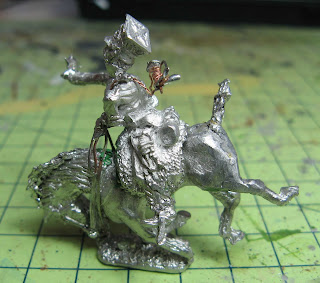 Trumpeter crashing to the ground, hands flailing, trumpet flying loose - in my minds eye I see the canister striking! 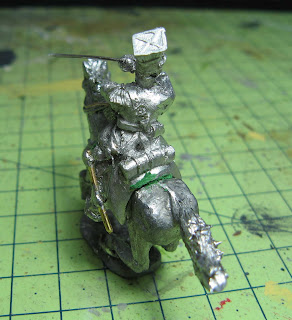 Officer about to crash his sabre down upon his foe, drawing his arm back & leaning into the blow. The sword scabbard is flying loose on its belts, His boots are dug into the horses side for more purchase . The horse is turned to that side pulling on it reins  too. Mane and tail are reworked with the soldering iron for more movement.

I have had some new figures arrive last week. The revolutionary wars generals set from CP Models. So time for a new Napoleon. A really nice figure to paint. I also took delivery of some new paints. Acrylic paint sets by "Andrea"  - Blues, Reds, Greens. They give a base shade and complimentary range of differing lighter and dark shades you can use straight from the bottle. They are strongly pigmented and cover really well. Not a cheap item but I can highly recommend them. I sourced mine from Historex Agents in Dover , one of my long time suppliers. They arrived promptly as usual. 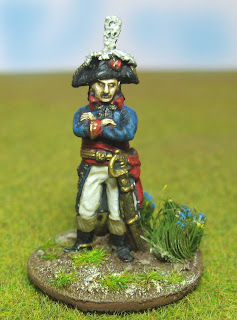 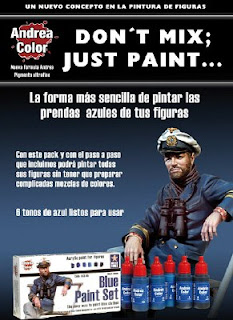 I also decided to crack on with the French Light Infantry unit that has been undercoated and blocked for a while. I used the Andrea blues set again here too. 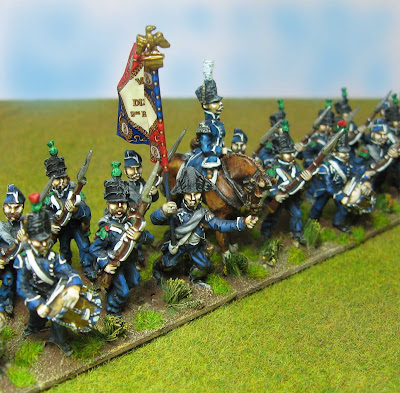 They are on bigger bases than usual to represent a more open order formation. They are an "Elite Miniatures" unit in campaign dress.
In addition I have been working on the Vistula legion lancers castings. I have been to see the master of the soldering iron Doug Mason (NEW BLOG SPOT!) for a bit of a refresher masterclass.A true artistic genius. I felt like Luke to his Yoda. Here is one of them - horse completely repositioned tail and mane reworked,wire reins added, rider arm repositioned, lance added, pennant from brass sheet. 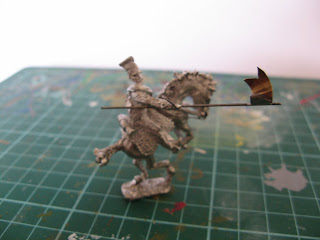 Looking forward to painting these guys. I have about 18 more castings to prepare yet though.

Oh and the Colonial stuff has turned up! choices choices...
Posted by DaveD at 11:48 4 comments:

Strike up the band & some new technology.

Well they say music stirs the soul. This week I have been working on the newly arrived French Guard Band set. It is not always about the fighting troops and these guys will add some colour and fun to proceedings and maybe improve the moral of the fighting troops. This is a "Bicorne" miniatures set of 22 figures. The castings were of excellent quality with little work required to clean them up. In terms of make up the figure mix does lack a few instruments having more trumpeters than required but no trombones and again more bassoons than required but no clarinets. There is a nice two piece casuality set with the pair singing along - these are labelled as flute in the catalogue , but are both actually carrying trumpets. They are all also sculpted in campaign dress. I have access to a lot of information on Napleonic uniforms , but there was not much in the collection on the various bands campaign dress. I did however find one decent reference for 1806-7 where the band wore striped trousers on campaign, so I went for that option. 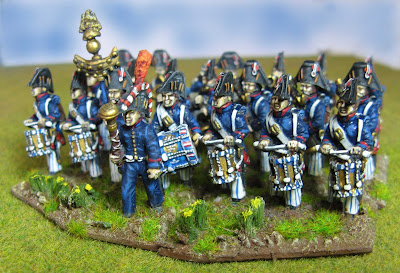 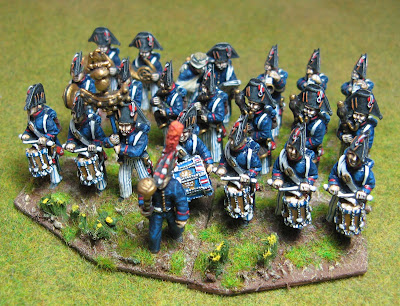 Usual undercoats, Humbrol 67 (dark grey) for the dark areas and 64 (light grey)for the trousers. Blue is Vallejo Dark Prussian Blue highlighted with a mix of Flat blue. Of course the time consuming bit was the trousers. After uncoating they were done in Humbrol 33 white and allowed to dry. The stripes were done using Vallejo Flat blue thinned with 50/50 paint/water to form a thin ink consistency, Using a decent long sable watercolour brush with long bristles and small point it (it was a No1)  was just a case of loading the brush with  the paint.ink and completing a stripe or two and repeating around the trousers. Once this was done there was a little more shade and highlight added to the folds with a light grey /white vallejo mix. They were Matt varnished. And I refreshed the mettalics using a mix of Vallejo Brass with some added in Rich Gold powder (ROSE paints) to make the instruments shine more.

I enjoyed these as they were something different. I am still on the look out for some nice full dress bandsmen to do another time. I would also like to get hold of the Mounted Cuirassier band produced by Mirliton as well.(Mirliton - Cuirassier Band). Turns out these are available through Vexilla


TECHNO TIME
I have also been playing with technology this week and got hold of "blinky lights" from an internet light effects jewelry website. Product name Alectralights available in a host or colours - I went for Orange - so with a bit of basing and spraying some cotton wool a murky smoke colour I now have some burning firing etc markers


Not great video quality but you get the idea. The actual "blinky" is a two part cylinder about 10mm x 10mm has a battery life of about 10 hours - they can be changed as well - also came with spare batteries. They are also magnetic and come with a small magnet . You just screw the top down until it turns on , and unscrew to turn off or to change the battery. Cost £2 per "blinky" - but sure with a bulk order discounts can be found. 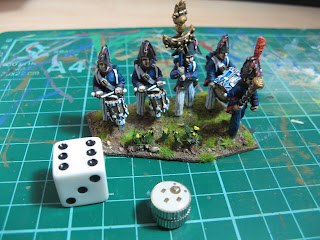 Just to give an idea of size - they are really small.

Available from Warlord games- with a small selection of colours.
Or if you want some more unusual colours  from Blinkylights

Back to more work on the castings for the Vistula Lancers - there is going to be a lot of conversion work here , this unit will be a real one off. I have a French light infantry ready for blocking and finishing as well this week. I am also eagerly awaiting the arrival of more lead from the "Colonial" period - Time to get back to true roots more later.
Posted by DaveD at 09:53 7 comments:

I have had very little painting time this week as I have been travelling in the day job, and called in at Marks WHC on Sat/Sun  to check out the new Arnhem game set up. I was cajoled into calling in the Allied air power - rolling Double 6 - 4 times out 5 Yes the dice were examined and proceeded to roll 2's for other people.  So  anyway I decided to complete a few more command stands last night that had previously been undercoated. (Usual Humbrol Tank Grey 67)

Two Polish divisional generals. Both by "Front Rank" again very nice castings. I used "Front Rank" horses  this time as I felt the riders pose went well with their walking horses , so I chose one with head up and one head down. These has been completed in the last big horse batch. As per previous Poles I used Vallejo Dark Prussian Blue , and lightening from there with Flat blue mix. These were finished in Matt varnish for their new home. Again this did mean a slight refresh of the metallic once that had dried. 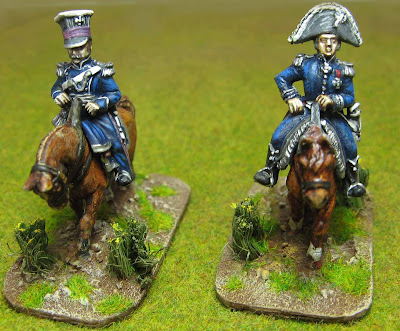 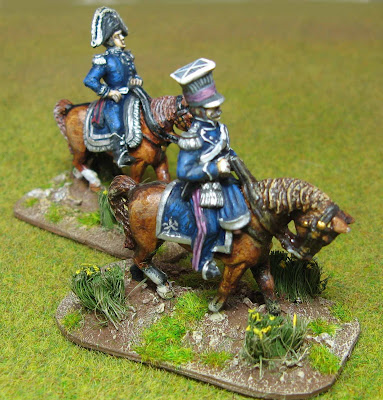 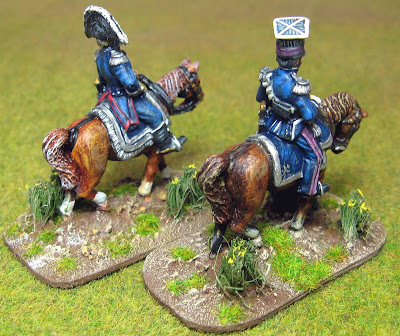 The Bavarian General is again "Front Rank". This time he is a bit more animated. Looking through the completed horse batch there was an old "Connoisseur" heavy horse that I thought he looked really good on, so the two were paired. The basic block colour was Vallejo Flat Blue which was highlighted up gradually and finished with top highlights of Andrea Blue (70841). After the Matt varnish I again refreshed top highlights and metallic. 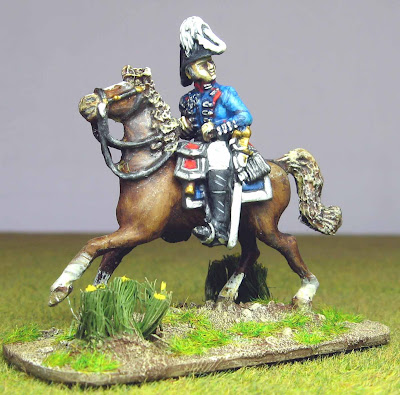 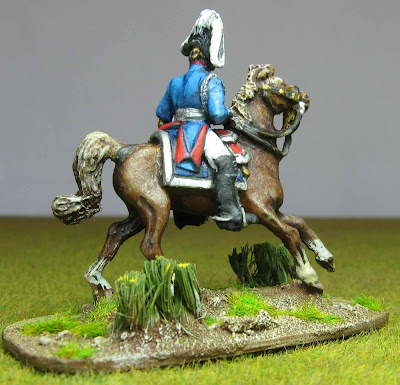 As for this week I have had a project bumped up the painting table with the arrival of castings from "Bicorne" of  a 20+ piece set for a French Guard Band. They look interesting and fun to do - a nice wounded pair singing along included. Plus more work on the castings for the Vistula Legion Lancers that are in progress.
Posted by DaveD at 11:28 2 comments: