Today the lads from the Old Guard Wargamers  met up again as part of an occasional  "big game days" .We have been taking it in turns to run a game for the fellow members , which has been a great way to move personal projects on.

Today we were treated to a game by Martin (28mm Heroes blog). This was to be a hypothetical battle as part of the Very British Civil War in 1938. We would fight over the village of Scruton - the village where we play, Martin had made models of the village pub (where we ate in today) , and the parish  hall we play in (the former school house), with a range of other nice touches from the cricket pitch , to vegetable gardens .

Martin had devised a great scenario based around an alcohol shortage, and who held the newly re-supplied village pub. We would have 7 factions - wewere "supposed" to form alliances based around the traditional left and right wing sides.. - somehow we all though alliance was code for shoot your neighbour in the back... which ended up great fun..

I was given the "Anglican League" -made up of the Police, the Women's Institute, a priest as leader and band of Warrior Monks!  something more inappropriate I cannot think of! - 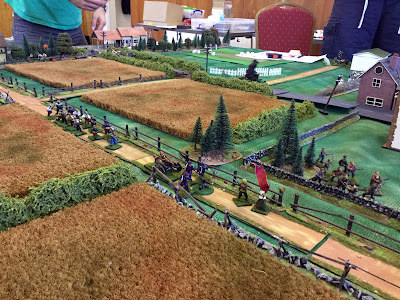 The game ended with Pete managing to hold onto the pub - somehow... and i think every faction had managed to NOT make any alliance , just shoot whoever was in front of them.. it made for a great game.. lots of laughter,,

One of the main aims on getting my new man cave up and running was to be able to have a table set up permanently for gaming - along with having my dedicated painting space.

Well today that has come to fruition. I worked with a local joiner to build me a bespoke solution.  It is a mobile table (locking wheels) with full size shelf for storing boxes under the main surface.. It is 6 foot by 4, with the option of making it 7x4 , or 8 x4 by lifting the ends up. It was made so it can come apart easily should we ever move -unlikely!! but you never know.

Over the last year I have invested in a number of gaming mats for it , so i have been getting them out. 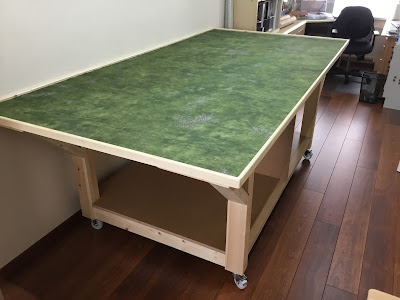 I have added some anti slip matting to the top which keeps the mats in place. 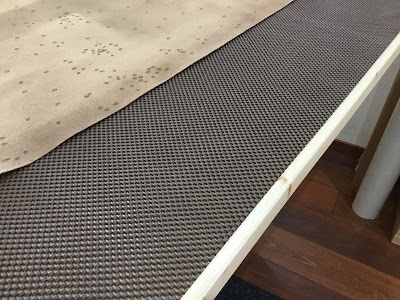 I have some nice cloud backdrop prints on order for taking pictures.  Time to book up an inaugural game!

Since the Partizan show I have re tidying up and re-organising the storage boxes to make better use of those I have - and they are all now stored away until the next big game on August at The Other Partizan event on the 20th of August. In the mean time I have an upcoming game of VBCW to look forward to with the guys from the Old Guard club near Northallerton. Its being run by Martin (28mm Heroes blog) so look forward to seeing what he does with it.

The paint desk now has a few different things on it for a change as I am doing a few units for friends,


The man cave works have been progressing in between things. My display cases are all now up.


hopefully the new games table will be built in the next week or so...