In-between running the game and chatting to people (a lot!) I managed to nip around a few traders and have a bit of a stock up..I did had a decent list of things, and got most of them.

I sourced a load of bit for the desert terrain box from The Last Valley. Bits of scrub, brush and trees. I also got an oasis and wadi piece , that got used on the day , but its packed away at the moment. 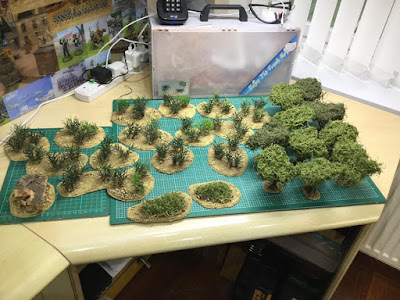 A new Sudan related book , and the new set of Napoleonic rules with markers 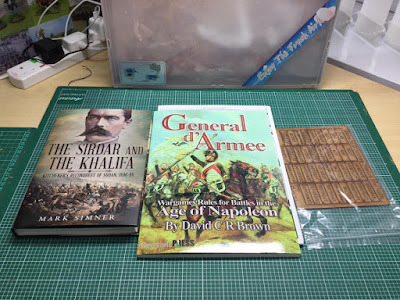 a couple sets of paints - the Yellow is new for me - I have been using the flesh colour set for years and had just started to run out. 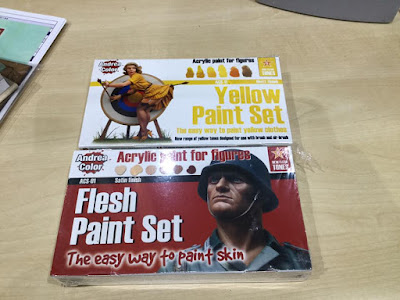 A stash of Perry Egyptians and Sudanese infantry, and the new Zulu war plastics - need to pick some more up to finish the 6 more units I want. 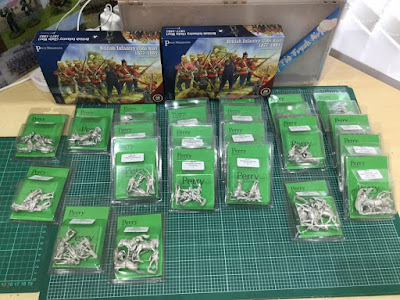 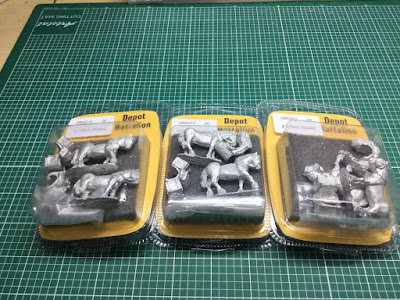 I have also got booked up to run a game at the August Partizan ... time for boats I think!
Posted by DaveD at 20:12 21 comments:

The action picked up pace as the morning went on with more Mahdists arriving in force . 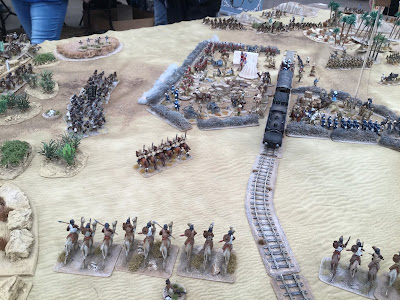 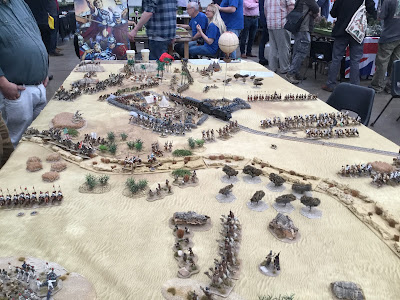 Its been a great weekend. I took a trip down to Newark to run a large Sudan game with Martin and Steve from the Old Guard club. Martin and I overnighted and met up with Simon Miller and friends for an evening of gamers chat , a curry and beers . This morning we set up the game and let the fun commence.

My new 12x6  Tiny Wargames mat turned up this week so it got its first run out , along with a lot of new units completed during the winter.

With the Partizan game looming up I have been pushing on to complete work on the railway. I am pretty happy with how its come out. 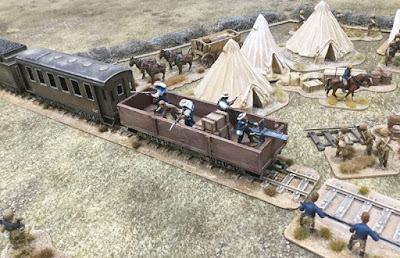 I made a Sudanese construction set laying a rail section too. 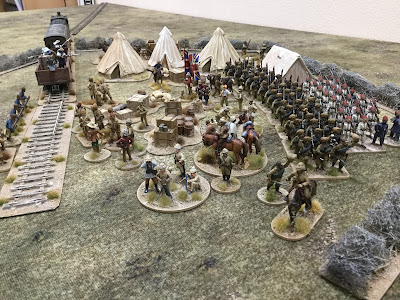 Time to strike camp - there might be some Fuzzies about!

Works are moving on again with the mancave , and I now have the temporary table up to allow me to plan how I will make a more permanent one. 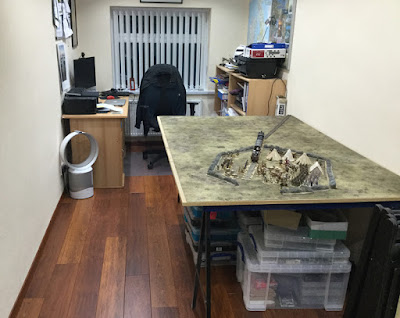 I will get a movable 8x4 table in with storage underneath , just need to finish designing it and get it built. 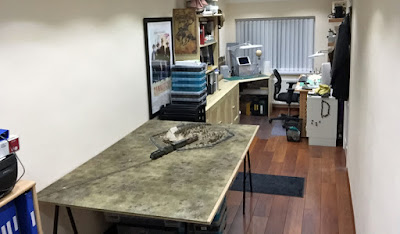 Plus I have now received the custom made glass splashback I had ordered to put on the wall above the work surface and below the display cases . Its 1600mm x 360mm and is made up of my own pictures of some of my own units and favourite blog pictures. This will be good protection when using the airbrush , or doing other messy jobs. 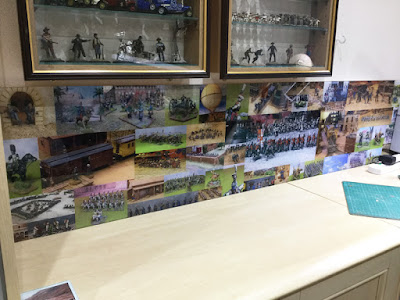 Its been a very busy couple of months since the wind down of the winter painting challenge with lots going , so its about time I caught up here. The works on the man cave are into their final phase, and with the impending finishing of the other upper room refurbishment we are doing it will be time to look as game table options.

In the mean time work has started on a couple of things . Having a game coming up at Partizan has pushed me to get on with the Military Railway. I had picked up a toy train set by "Teemsterz" which was labelled as 1/55th scale - they are still available on Amazon and e-bay for a few more.. I found it in the local post office just before Xmas it cost £3.50 - so I bought two sets. I have butchered  one carriage to make a flat bed one , and added some plasticard to armour the loco part. The rails and sleepers are proper model railway On30 track i sourced form my previous Cowboy project which looks the part. While the model does not sit on the rail rather over it I think it will work ok. If not i will shorten the axles if need be. 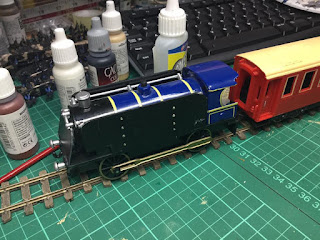 I have also decided to finalise my basing on the skirmish stands for the Sudan into permanent stands rather then single figures in sabot trays - so the Mahdists have been completed. 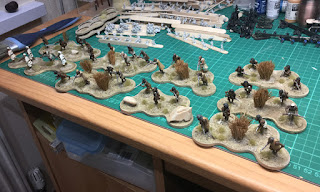 Next up is some progress on the upcoming 10mm ACW group project with my first Union troops painted. There are a few of us painting units for a first game hopefully in June/July. 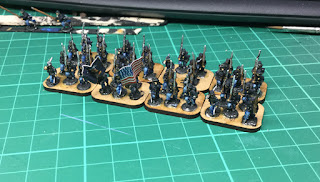 and the next lot started 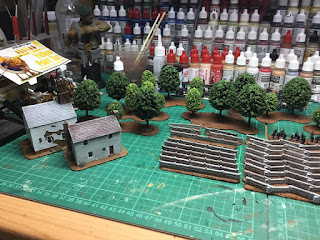 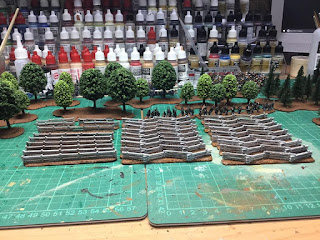 A few new purchases from the "didn't go to Salute" spending.. 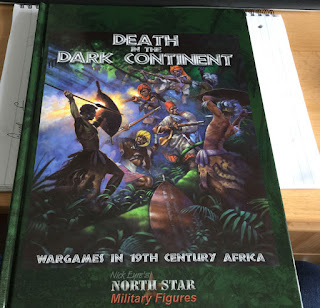 Lets see where this ends up ... 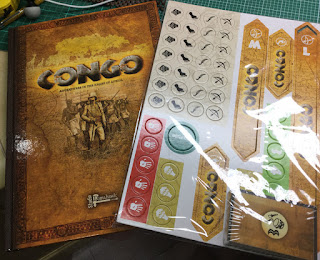 And finally , as part of the tidy up work going on I found my sets of Eagle and Dixie cards by Colombia Games, so decided to get Deepcut Studios make me a bespoke playing mat in mousemat material . Its 22x34 inches and I am very pleased with the result 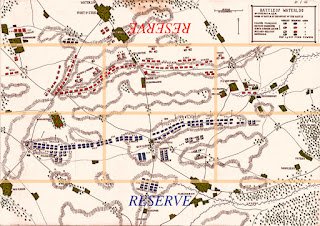 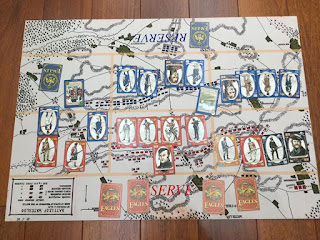 So there you go - its been busy! If you are at Partizan , pop by and say hello..