This is the first post for the new project which is 15mm WW2. Following some WW2 gaming (See James' Mad Tin Hatter blog ), it has reignited my interest,  so along along with MartinC '(28mm Heroes blog )and old friend Scotty it seemed like time to take a leap back into the period. With the four  of us doing it we will have a lot of options.

I have decided to build my own American force, starting with an armoured combat command task force, with Shermans, M10's , infantry in half tracks and the associated support. This will be followed with an 82nd Airborne paratroop unit and a straight infantry unit , complete with the kit to do a D Day landing scenario. There will also be a small German force along as well . Terrain will be enough to fill my 8x4 with a few different options. Should keep me busy for while.

the first assets were completed in the closing weeks of the AHPC so here they are.

I really enjoyed doing the tanks , big enough to spend some time on and get nice results - really looking forward to some German camouflage ones in the future . As for these I have left them pretty clear of stowage so far while I crack on and get them game ready - I will revisit them later in the year and add that.

I decided to go tuft heavy on the bases for the summer look - so much so I broke out the flock box and made some my own in large sizes.

The first mdf buildings have been built , they need basing and full weathering yet so they will feature in a separate post. I have also sourced some fine resin building by Tiger Terrain - really looking forward to doing those.

There has been some significant shopping activity to flesh the force out with more vehicles, AT guns,SP Artillery , and more infantry - this is on the desk being constructed ready for painting.

also got lots of bocage hedgerows being made too.

Battles in the Cotentin here we come..

AHPC VIII - Round Up

Well where did Challenge VIII go eh. This is my was 7th foray - and i enjoyed the usual whit and repartee plus following along some fine work by fellow challengers. Running the paint & chats was fun as ever - Kent you are such a paint machine...! lets see you on them through the year. Paul O 'G - I am just jealous...

As for me, it  was perhaps not as fruitful this year as I had initially hoped due to losing pretty much the first 5 weeks due to illness - I really don't want to see that flu strain again thank you very much! With too much gone it was just not going to be possible to play catch up on my initial target this year given the units i wanted to do . I decided to go off list and play with some side projects...

the 6mm Modern Soviet force has been completed.


JamesM is to blame for the foray into 15mm WW2 - which has come from left field - I am really enjoying it - there has been a lot of stocking up of bits for it - so plenty to come. 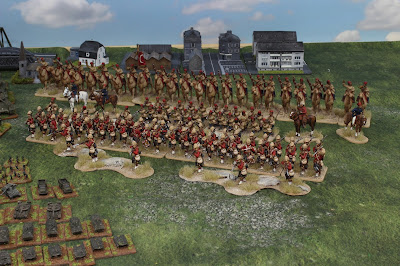 Key units for the Sudan were completed - the Cameron Highlanders - a unit that was in all honesty bloody hard work, Plus the Egyptian Camel Corps. 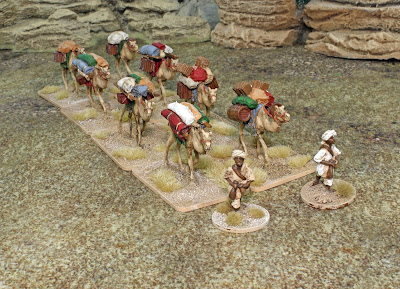 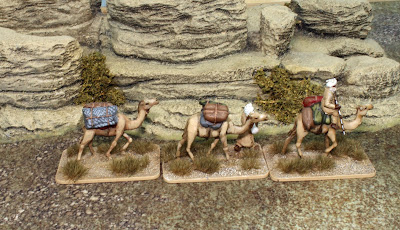 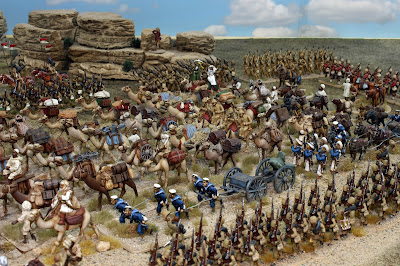 I enjoyed a madcap challenge with Sander and Arthur in relation to Camels... Arthur was the star! 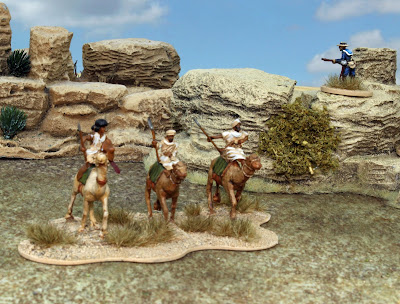 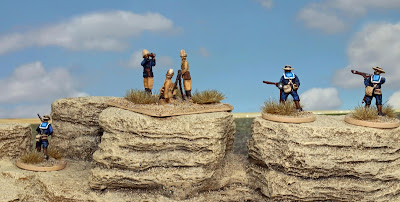 I enjoyed the addition of terrain items which helped with the 6mm project big time.

I will be working on various bit for the Normandy project , and Sudan bits and bobs.

It feels like time to do a review of the various projects I have on the go at the moment. I have been fairly busy over the winter period adding to things. The significant change is that there is a lot more gaming going on which is good , and this has driven some projects along and sparked interest in anew direction.

So whats going on?

The Old West collection in 28mm. Nothing new being added or is needed , and its been 12 months since a game. However as a result of Hammerhead show being moved I have an opportunity to put on a participation game, for which this is perfect - so I have booked in to do one. Looking forward to that. 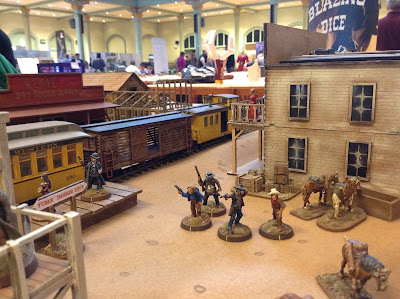 The Sudan in 28mm. It is still the big one , and with some new units added into it over the winter. There are a handful of items I want to complete (don't actually "need"), mostly Egyptian army related which I will chip away at this year.  I intend to run a very large game at some point this year. I have played a range or rules (Sands of the Sudan , Black Powder, Victorian Steel, Death in the Dark Continent) all of which work depending on the battle. Hopefully will have this at The Other Partizan in August 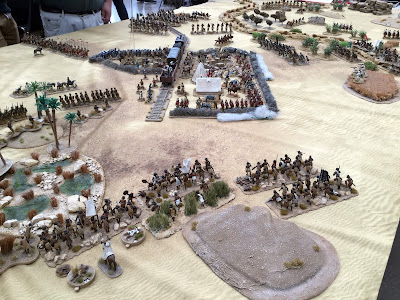 Napoleonics. Nothing doing here at all , really lost that interest at the moment.Perhaps just the odd bit of painting for people as the fancy takes. Not gaming this at all. 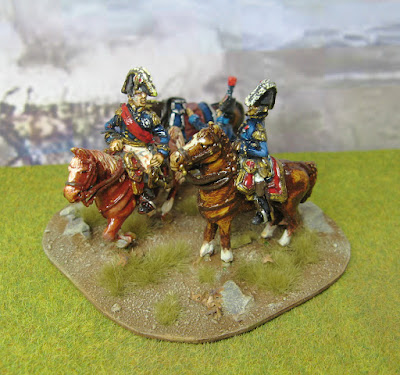 Bootleggers in 28mm. I have all the figures I could want and some buildings done , but I don't think its going anywhere at the moment - I am now thinking of selling it all on - so if your interested! Not had a game with these at all

ACW 10mm. I now have a brigade of each side , with figures to do another for each too. I have all the terrain I need , some of which is very usable for other 6mm and 15mm games too. Had a few games of this , and a number of guys in the Old Guard have units too. It will never be a core interest , but will certainly be added to bit by bit - at least its fairly economical now the terrain has all been sorted. Rules in use are Regimental Fire and Fury which do work, but I want to try Black Powder and Picketts Charge too. 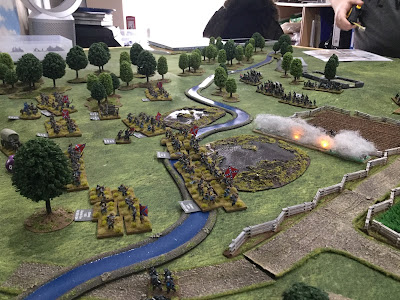 Team Yankee moderns in 6mm. Came in from left field as result of digging out my lead mountain of GHQ stuff actually from the 1980s. With interest in gaming in by James and Martin its helped to get this almost completed. I have done all the terrain items (and re purposed a lot of the 10mm terrain) and completed my Soviet forces. I have a small West German force to complete and this one is done. We have been playing Team Yankee  and I want to also try out some other rule sets as well in the future too. 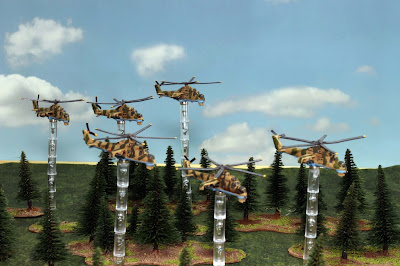 So with a number of projects being at the fairly mature stage its time to look at something new and I have decided to do a WW2 project in 15mm. This fits in with James and Martin and allows us to expand the scope and scale of the games.

I have decided to revisit a very early war-game army , and do American forces for North West Europe 1944. The first items have been sourced and painted and will be the subject of the next posts.. Rules will be a mix I think with Flames of War (we really don't do wall to wall tanks!) and Battlegroup initially. 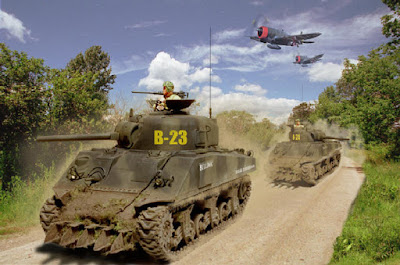 The man cave saw another game this weekend. James came over , we did some more planning on mynext new project (more soon) and we took the opprtunity for a game. As I now have a Confederate brigade I thought it might be good to get the their first game in.


I just set a simple scenario that used two Brigades of Confederates - one veteran and one green, against one Union Brigade - which for a change from out previous games was mostly veteran and crack.


Another good game was had. It really made clear that the quality of your troops makes the difference. The new green Confederates all ran in the end .. the Union veteran and crack troops made it look easy.

A good game. I will continue to add to this collection over the year. it does look very good I think on the table , and with a relatively small outlay overall is worth keeping on with.

I mentioned before i was looking for some better bridges as I thought the resin ones i have are just too small. I went on a interweb trawl looking for model railway ones so here are the ones i found.

These are N gauge MDF kits for a short and long single track girder bridge . The are by In The Greenwood Laser . They are 45mm wide , 47mm high , and 97mm and 145mm long respectively.
The price was reasonable , the  service from the the company was quick, and they are a nice simple kit to put together.

I made some supports and ramps from some 2mm MDF bases I had in stock. The end supports and bridges have small magnets in them to enable the main bridge to be removed to pack them  away easier - and allow me to add other bridge types in the future too.

I gave both bridges a spray in an olive drab colour and gave them a bit of highlighting work. I added on roadway detail by making it in Powerpoint and print it off on heavier paper and glueing on with PVA. 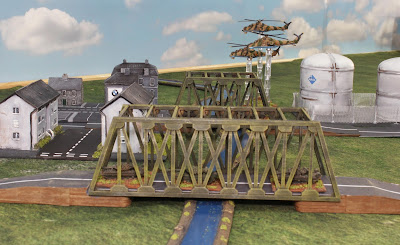 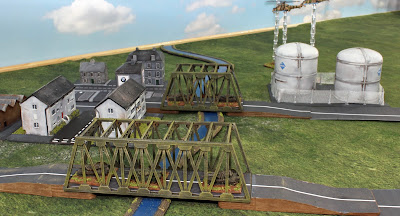