I have had the existing man cave just over 3 years , and with all the productive work that it has enabled its getting a bit full! We have a bit of refurbishment work planned for this year so I have now been given a new larger room to turn into my day job desk space , and my hobby room. Its one of the larger rooms in the house so it should work well.

The room is the full length of the house with windows at either end . It has had new windows fitted, and new lighting - LED daylight down lights which are switched in 3 sets. 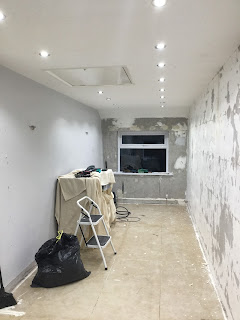 This end will have the day desk, bookcases and a space for a decent sized games table in the middle. Hopefully that bit will be up and running by the summer. 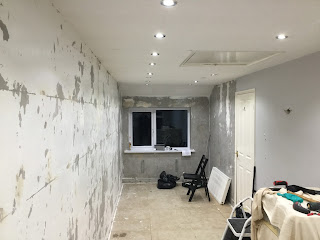 The other end will have two desks one on each side. One set up for painting and model making. The opposite one will be set up as a permanent airbrushing area which will ventilate out through the new side opening window.

The loft space above has a large access hatch and ladder and is fully boarded,  so there will be plenty of storage available up there too.

Work has finished making things worse - its now getting better. All the plaster repair has now  been completed and wall covering completed. Painting to complete through this week. 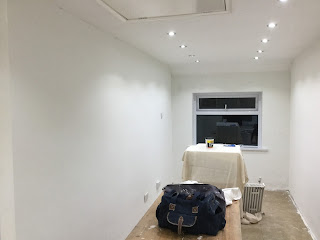 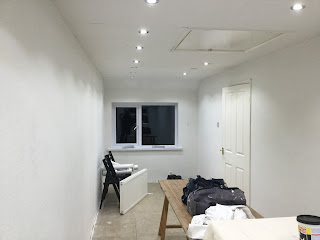 Flooring is sorted for installation next week,  along with new blinds - it will then be ready to start moving into.

Engineers are always a good source of scenario fodder I think . Build a bridge, fort, be escorted to some place or other, so I have taken the opportunity to utilise and convert some spare figures. These were Perry gunners left over from the last gun battery. I have added a range of tools into hands (tools from Thormarillion in Germany) having removed the rammers. I also completed two waggons & 4 lots of  stores (bits by Ainsty) sections . The mules for the waggon are by Tiger Miniatures , again left overs from the battery limber teams - all good recycling. The two waggons and loads are by Warbases. I have left them without drivers etc for now as they will do service in other conflicts I think - likewise I will probably revisit the missing traces etc at some point this year.

The Officer of Engineers is an old Connoisseur figure who has gone native , having taken a shine to his tarboosh! 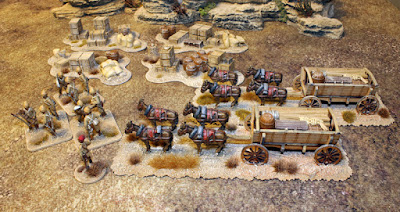 This will be the last Sudan painting post for a while - as the old man cave is wrappd up as work starts on creating the new and improved one..

There will be some more games coming up . I am also booked in to attend the Partizan show in May

One of the things that I found really interesting about building forces for fighting in the Sudan was the variety of troops the British Empire pulled in to fight in it. The New South Wales government offered its support (LINK) to the imperial cause and an infantry battalion and artillery battery were mobilised. This was to become the first overseas deployment for Australian forces. They did not end up doing much fighting and had only very small losses as the British government abandoned any attempt to overthrow the Mahdi who had taken Khartoum after Gordons death.

Never the less they will still be represented - along with the infantry in due course and I am sure they will participate in some "what might have happened" scenarios. Of course they will also do service in some other colonial campaigns too. 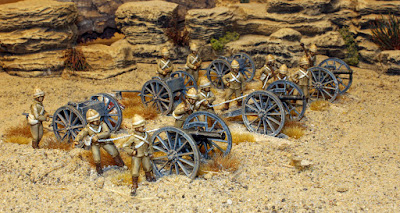 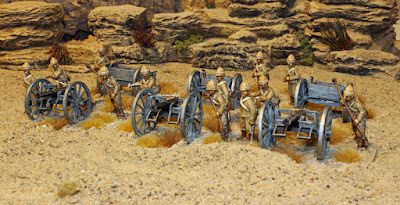 So here I have 3 deployed 9lb guns , 3 open and deployed limbers with 12 crew. The guns are the Perry 9lb set from their new Victoria's little wars sets. - I have replaced the cast metal firing lanyard with thinner twisty rope and soldered this into position so it nicely strong and rigid. 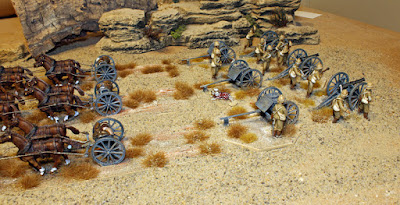 The gun teams have had a lot of work with all the various traces. The rope is made from garden twisty wire - twisted together in a drill - I needed to made 6 feet of the darn stuff to make the 4 traces per teams these were then soldered into place and the wire is coated in solder which makes it rigid.  The riders have had milliput saddles made too. The limbers and horse teams are all by Tiger miniatures . The guns and crew are the Perry 9lb set from their new Victoria's little wars sets. I could have got a ready made limber set from Wargames Foundry , but I have seen it and it looked too small to me - I wanted this to be big! - I know.... I blame the sun.... 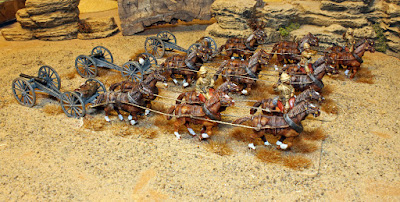 Well to move your guns you also need limber teams - of which there are 3 teams with 18 horses, 3 limbers , 3x 9lb guns - and 4 riders - there will be 9 riders eventually but due to a lead pile deficiency (hangs head in shame)  I thought - and still think I had some. So anyway I am awaiting on a mail from a manufacturer re sourcing some as part of pack so will just add these as and when I get some figures.  The riders I do have  are a mix of various mounted figures I had lying around.

I enjoyed making these - something different

Hammerhead show - A fine day out.

This weekend saw a run down to Newark and the Hammerhead show where I had booked a decent sized table - and a few people had asked for game with the Sudan toys , thanks Kev and Andy for the laugh , so too to Roy who ably assisted with set up, help, and overseeing the mayhem you did a great job.


I ran a scenario based on the last battle we fought - El Teb , but it was beefed up a bit in terms of troops and with some unit stats tweaked as well . 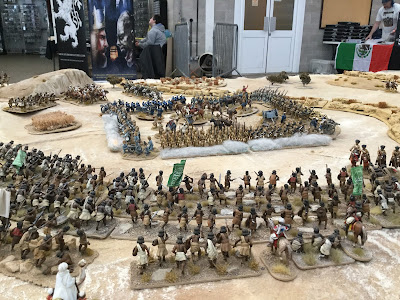 The mahdists try to force the square - but the firepower is too great - time for tea and medals! 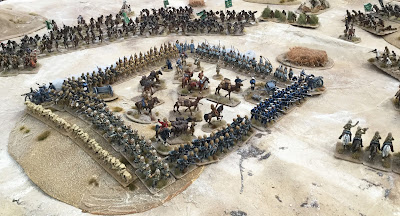 The Brits were bloodied ,The Black Watch had fought 3 tough melees being outnumbered 2 to 1 before succumbing . The RMLI fought like lions , cutting through the mahdist line , destroying two large warbands, and the guns before holding solidly in the midst of the mahdist line . it was a close run thing!

I had a lot of interest from people in the figures and terrain , so really good chats . A great day out.