I have been pressing on with more items for the up coming game. I have completed work on the batch of buildings. I picked these up second hand - they just  needed some work to lighten them up as they were too dark for my tastes. So a few shades of light brown, off white drybrushing later this is how they look now. Usefully the simple square ones will do duty for the Old West Mexican village too. 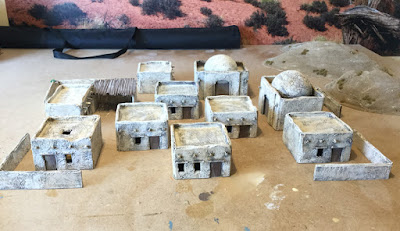 I have also finished the 3 vac form hills I picked up at York. These were filled with polystyrene packing balls, based on 1/16th ply, given a coat of PVA glue and then had the sand mix sprinkled over. Once dry a few shades of light colours drybrushed on. The steep sides were already textured by the vac form , so these were given a few shades of colour by drybrush too. One all dry I added in some scrub tufts and hit it all with varnish. 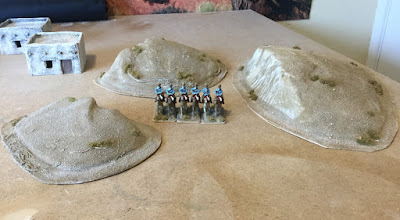 These gives an idea of the scale of them against figures.- overall not bad for £9.50 I thought. I will be going for some fully sculpted terrain eventually , but this will do for now. 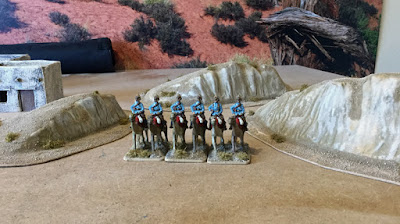 Next up I wanted to create my own version of the random events deck cards (Carlo does supply cards with the rule set , but i wanted more blanks , and having used Artscow for cards previously they pretty robust , have a shiny look to them , they are cheap and arrive quickly - So i have 2 deck for events and a complete deck of blank for writing up my own or using as blinds . Here is a view from the design section of the software - they are on the way  over from Hong Kong at the moment. 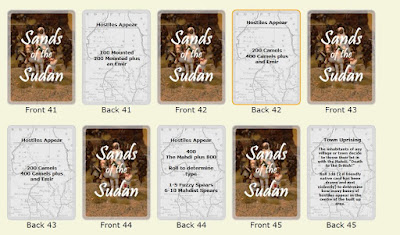 The rules use a roster sheet to record casualties and ammunition use. I have made these up into A5 laminated sheets with one for each Imperial unit. I have used a photograph of the unit for recognition and created a slide master on Powerpoint using an 1880's Sudan map as the background. 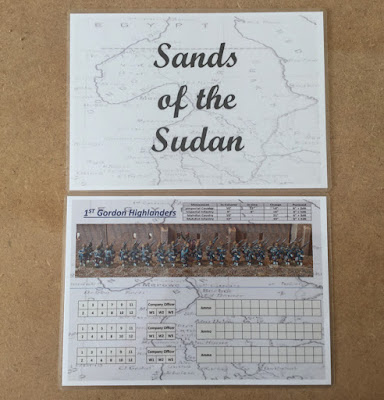 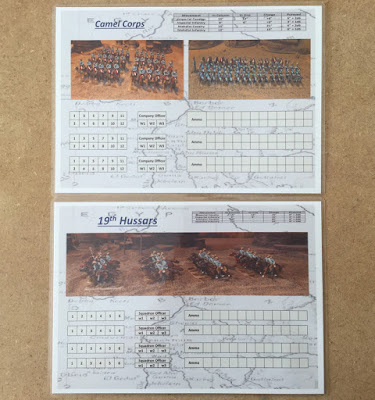 So its been a busy week. The first play test game is booked in for the 16th April - it wont have all the bells and whistles terrain wise - but I am looking forward to it. Its on my old friend Gerry's big table...check it out at the SITUATION ROOM blog

The Painting Challenge Round Up

Well , it's all done for another year. Not as productive as initially hoped, but I did get above the minimum targets I had set myself. 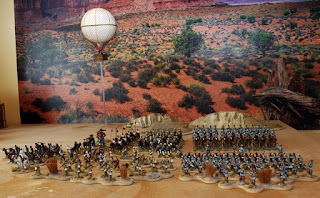 Mostly units for the Sudan

The main unit I wanted to nail was the Camel Corps, which was 36 mounted, 36 dismounted, 12 camels at rest, and 12 dismounted skirmishers. It was a big unit so took a while. Also completed the 10th Hussars and the Eyptian Lancers. I have no more imperial mounted in the lead pile. Result.

I also managed a number of vignette pieces, such as the signallers, the medical section ,Sapper Corporal Millsy and Major Docherty, and the war correspondents.

The final entry was the Balloon Detatchment, which was an enjoyable model making challenge.

The Mahdi himself put in an appearance along with a few top up foot troops. - takes me to just over 900 foot now

I also completed two 54mm Cowboys to provide some distraction from dusty stuff, and a few 28mm miners, plus the Curtgeld.

While it was a slow start overall , it ended reasonably well. I also enjoyed my Wednesday minion duties helping out Curt with the admin work.

I am moving on to other terrain work for the Sudan and various other game aid items . The first dust up is booked in for April the 16th.

A little sideline of something from left field for the Sudan. While flicking through some reference material I found mention of the "Royal Engineers Balloon Detachment " that took part in the 1885 Suakin campaign. In a fit of madness I thought that would be something very different, and an interesting modelmaking challenge.

Balloons were first deployed by the British Army’s Royal Engineers during the expedition to Suakin in 1885. The balloon, which was of goldbeater's skin (a thin transparent membrane with great tensile strength which was traditionally used as an interleaf for the manufacture of gold leaf) , covered with a netting. It  measured twenty-three feet in diameter. When filled it contained seven thousand cubic feet of gas.This had to be brought all the way from Chatham in the UK, a distance of nearly four thousand miles. 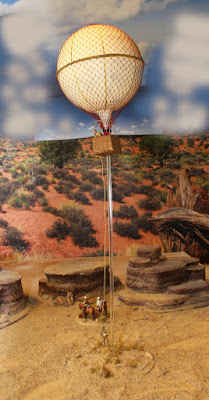 The balloon would be used above a column of troops at about 200 feet up to give advance visibility - communications was by dropping message down to the ground. Here it is mounted on a 300mm long, 5mm diameter transparent acrylic rod set onto a CD sized base. The rod fits in to the base of the balloon through the basket.

The balloon itself is made from a 11cm Polystrene sphere from a craft shop with Milliput used to form the base inflating area part. I found a large "O" seal in the spares box to stretch around the equator part of the balloon. The netting was recyled from a bag of onions , and was used to cover the painted sphere and tied round with a cable tie to the base of the balloon. I made the basket from balsa wood , and the rigging and ground rope hanging from the balloon is twisted wire all soldered together. 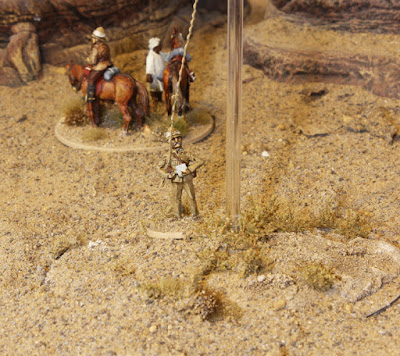 I now need to get my head around making a full ground crew, and transport for the deflated balloon and gas - but that's a project for another day or several.

a few of the pictures i found on line while researching

As things have in general been a bit dusty on the paint table with work continuing on the Sudan stuff I  wanted to do something a bit different with some strong colour. Here we have another Andrea Miniatures 54mm Cowboy - its the classic John Wayne from the "The Searchers". The film itself can be somewhat dark an disturbing - you just never know if he is going rescue Debbie or kill her... 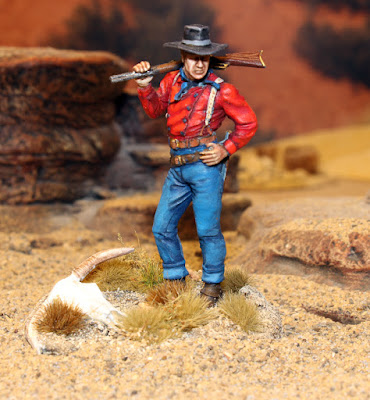 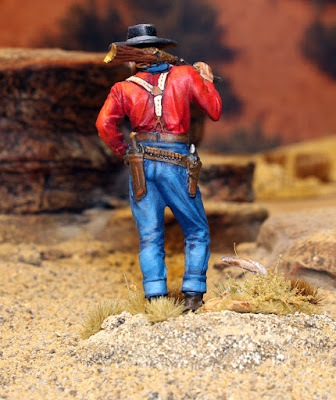 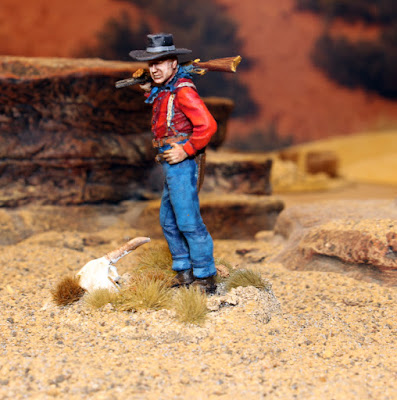 And by special request from Millsy - a group shot of the 54mm Cowboy collection - shoot out anyone?

More vignette pieces completed this week. The war correspondents from Perry, and a set of  locals making their way to town in possession of various snippets of "intelligence" , will it be accurate or lies, who knows! well the umpire will ... i.e.  me! 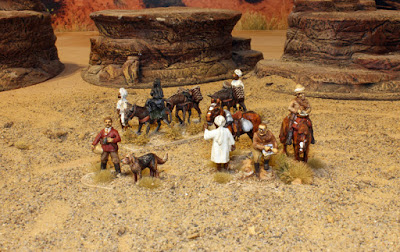 The dog is a limited addition piece from Jon at Ainsty who breeds Otterhounds, so I have added it as the faithful companion to Bennett Burlieigh the Daily Telegraph correspondent.

The reporters are another nuisance for the imperial commanders as they go off risking themselves, and needing to be protected, or more likely rescued. Nicely diverting the imperial players from their core mission. After all bad news always appears in the papers. 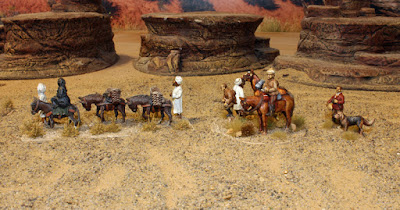 Also a set of locals heading to town with their wares. These are an old Connoisseur Miniatures set, the detail was very soft, but actually from table distance they do the job, and could just about be added to a nativity set!
Posted by DaveD at 08:30 8 comments:

The one arm that was missing from my Egyptian forces was cavalry. I picked up a bag of lead in a swap a while ago and it had these figures from Castaway Arts from Oz. They do an interesting and unusual range of colonial items, and I like to use a range of manufacturers across the collection.

I decided to leave these with lances upright , and just went for simple solder the 0.8mm  piano wire "lance" into hands and foot socket. 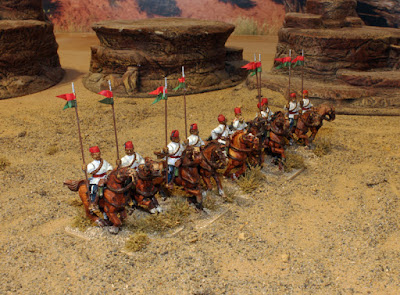 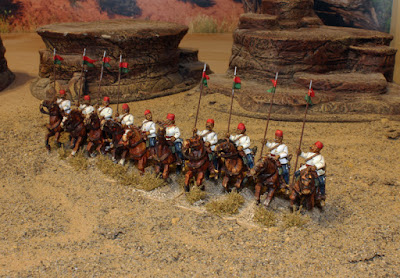 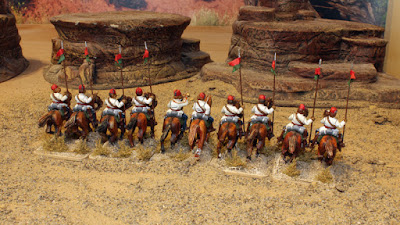 Lancers are always my favourite cavalry - you can't  beat fluttering pennants making their way across the table.
Posted by DaveD at 08:30 7 comments:

So part two of the Camel Corps consists of  a unit of close order infantry , and a set of skirmish order troops. It's taken an age to complete the whole Corps, so I am pleased to see the end of this lot. 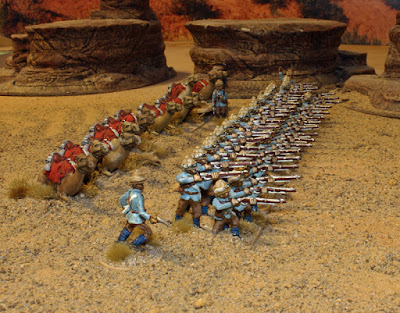 These are old Connoisseur figures , and i found them a pain to paint (which is unusual) as they were really showing their age , and some soft detail . I may eventually add some different manufacturer one at some point.

My rules also allow units to break up a company or two into skirmish formations , to help with recon and flushing out the bad guys.  I have 12 figures from Redoubt, these are individually based , and set into various free form sabot bases. This mean I can choose to field a number of "skirmish units" on the sabot base with between 2- and 5 figures so it make them go further. I just then fill in with tall grass / rocks etc for visual effect. 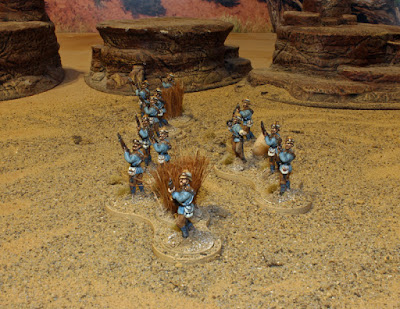 These were a lot nicer to paint than the close order ones.
Posted by DaveD at 09:50 14 comments: