Still more coming off the production line for the Nam project. This time a full platoon of NVA infantry in early Khaki colour. They are armed with AK47s, RPGs, RPD , a few snipers , a couple of mortars and flamethrower . This should give the US forces some extra things to worry about. There will be a second one along with green uniforms in due course . 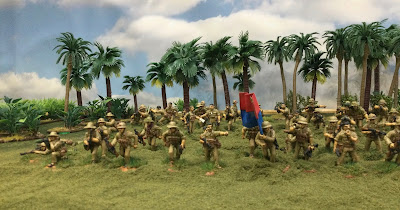 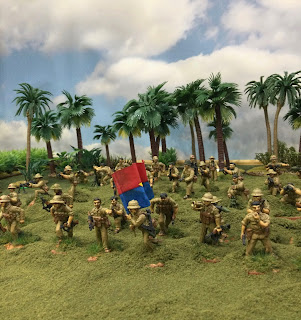 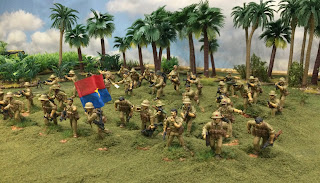 I have buildings and civilians to come along shortly. The lead mountain has been topped with extra additional pieces from Gringos , Empress , Full Metal and The Assault Group . There are some great figures to choose from ,

A few other bits have been completed for the US forces . These are by Full Metal Miniatures , and The Assault Group. 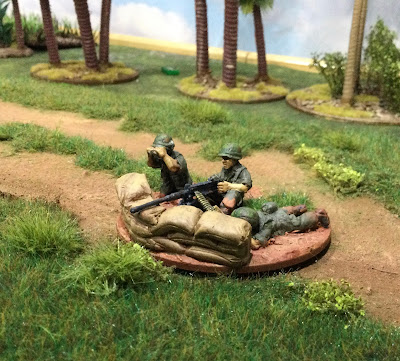 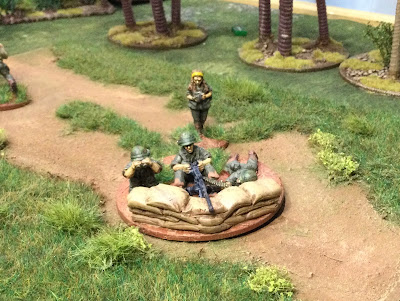 Downed pilot, useful for scenarios.
Female photographer to poke her nose in. 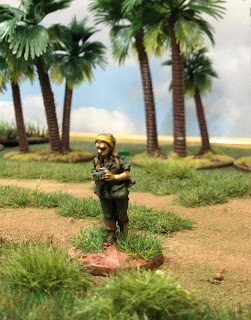 A couple of casualty figures completed.
Two more on order. 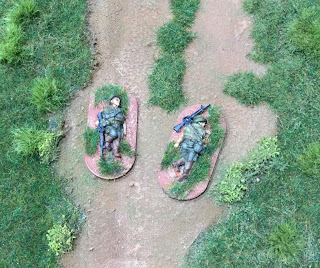 Next up the NVA platoon , which is just about completed .
Posted by DaveD at 21:10 1 comment:

With today being the start of official post lockdown you can meet indoors , Martin and I had a play  date . We decided to do Nam with the addition of vehicles and helicopters to try out the rules for those.

I had the table set up and the base scenario was a VC platoon had a captured high ranking pilot who they had to hold onto and hand over to the local NVA commander who was on his way with a squad to pick him up. The Americans wanted him back , but only had 60 minutes of gaming time. The system has a neat method of dicing for how many minutes that turn had consumed - by the last activating player rolling a dice of choice from d4 - to d12 . Obviously the US player wants it to go slow and chooeses d4   , the VC player is reaching for the d12 ! If the  US player runs out if time they lose. So it keeps the pressure on . 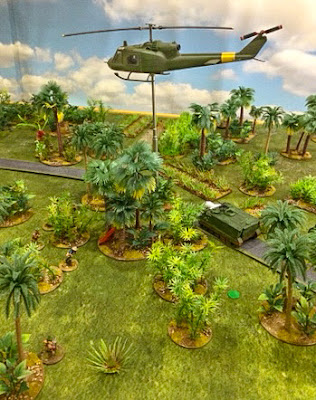 The US forces arrive on the table , VC squads in the cover look to ambush units on the road. 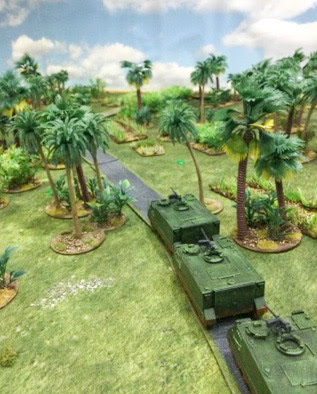 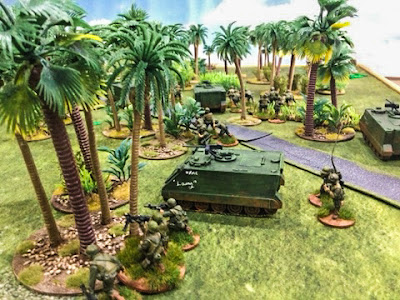 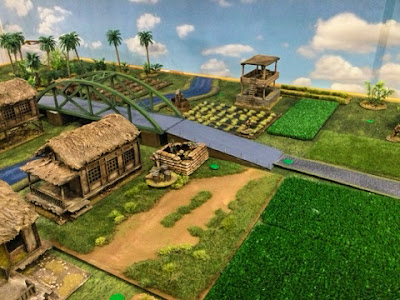 Scotty has completed the first batch of village huts for the project along with some sandbag positions , he has also completed 35 VC figures for his own collection - (Parkfield Miniatures) and he had dropped them off as mine are not done yet. 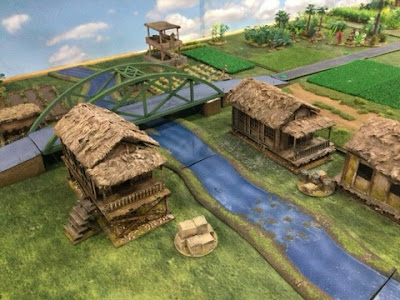 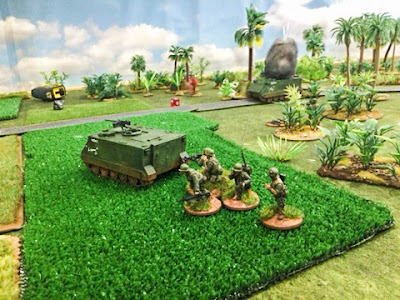 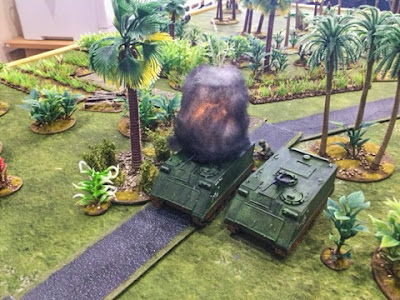 RPG brews up an M113 most of the passengers manage to get out. 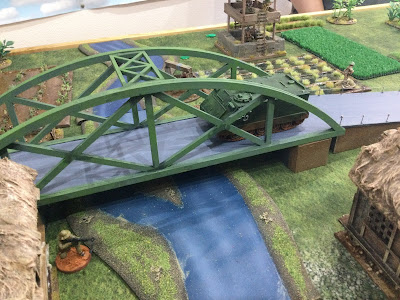 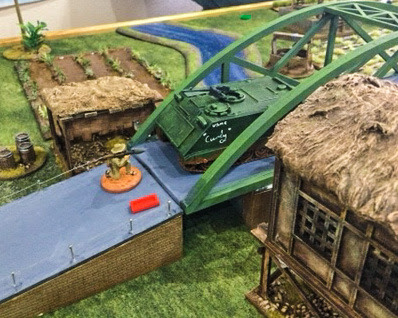 M113 attempts to overrun the RPG guy who is suppressed and too close to fire. 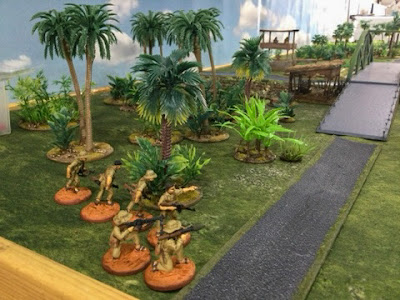 NVA team had turned up and were about to exit the table with the pilot as the APC let off a last few shots - which allowed him to dive fir cover and be rescued with the clock on 58 minutes!
US casualties were 4 dead , could easily have been a deal higher, asMartin was lucky on a couple of accurate mortar and RPG rounds  , -plus a blown up APC .
VC were about 12 dead , 16 wounded, 4 captured .
Overall a good fun game was had - learning more on the rules . We will play again soon .

After a coupe of weeks off from the brushes it’s back to it now. First up off the production line is a casualty ,stretcher bearers and medic set from Full Metal Miniatures . Pretty good figures to paint , and  provides a nice vignettes piece , and something useful for scenarios. 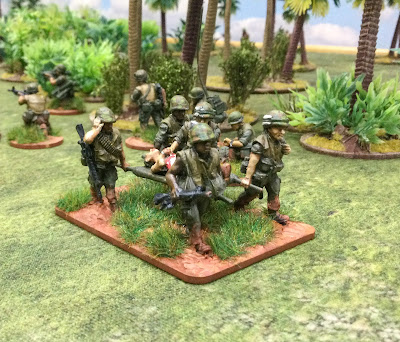 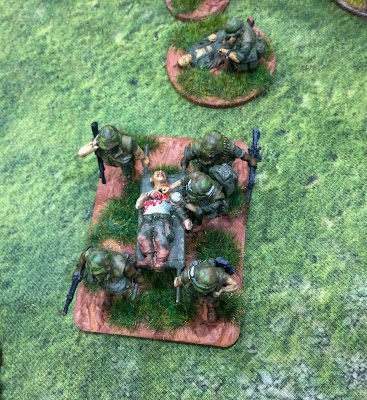 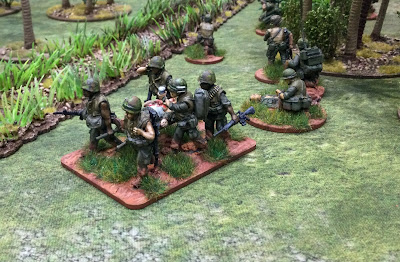 More FMM and The Assault Group figures on the table , along with a platoon of NVA .
With the further easing of Covid restriction we will be back to some face to face gaming from next week , so there is a Nam game booked in with Martin and Scotty ..

You may have seen some trailers or clips from this HBO documentary series by Oscar winning director Raoul Peck . You will find a few minutes of film in episode 3 , from 7 minutes in of the Sudan collection recreating parts if the battle of Omdurman. Myself , Martin and James spent 3 days in Paris in 2019 where we set it up and worked with the crew , cinematographer and director to create the scenes they wanted . 3 days had been distilled into about 3 minutes of footage. It was a real insight into the work that goes on making film/TV shows. 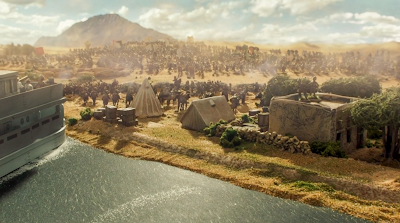 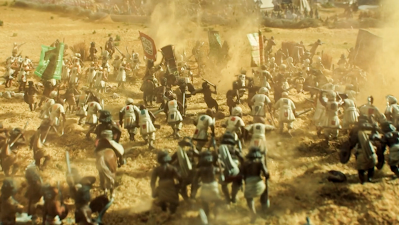 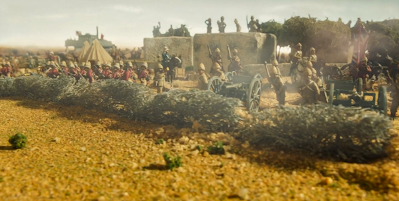 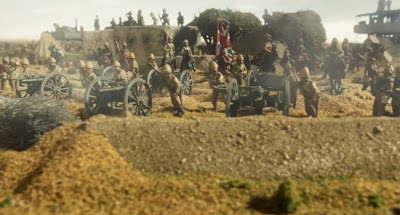 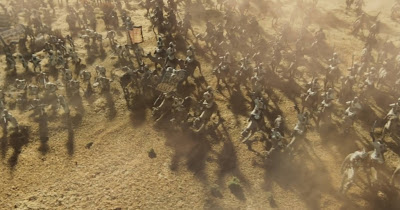 And the team are in the credits

A great experience overall
Posted by DaveD at 21:18 2 comments: