Out with the dice

The Austrian Grenadiers I painted for the Wargames Holiday Centre have had their first outing down there. I was there for the weekend for a re-fight of the 1813 battle of Dresden. Invariably of course you expect  that the nice new shiney troops would misbehave on thier first outing and be doing lots of running away. These guys however had a great game battling away on the eastern side of Dresden , even managing to see off an assault by a force of the French Old Guard. 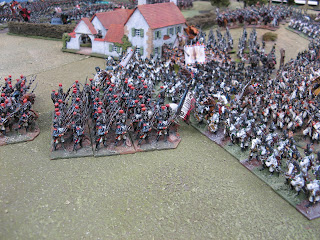