Sudan - back to it WIP

After a few hectic weeks it was good to get some hobby time today. I decided to crack on with de-sprueing the remaining Mahdist foot forces. These were in the form of 3 boxes of plastic Perry figures.

It's a job I hate as it seems to take almost as long as assembling and painting. I reckon it makes 16 boxes of these I have done since I started, so it's good to see an end to them. 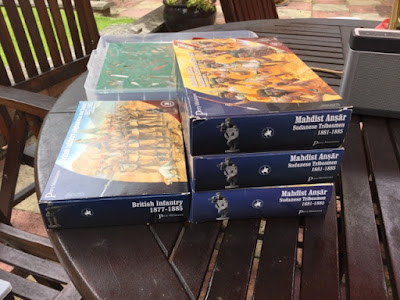 They are now all clipped and sorted ready for a mass assemble session. 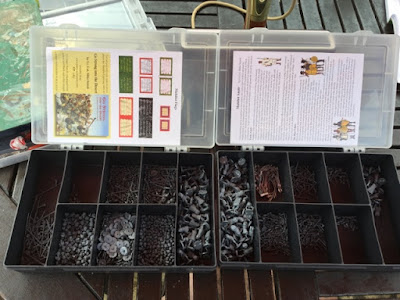 I also have a box of the plastic British infantry too. These will be used for some specials and conversion potential. I don't think the plastic bayonets will survive much past a first use though.

In addition it has been an afternoon of placing orders with various suppliers - PayPal - pay after delivery is a bad thing!
Simon Millers Big Red Bat Enterprisrs for large bases , magnets and a copy of TTS rules
Perry Miniatures , for Royal Artillery guns and crew
Tiger Miniatures for limbers and horse teams
E Models for paints and tool replenishment
Bicorne Miniatures for the Heavy Camel Regiment
Old Glory for British Lancer regiment,,,
The overall lead mountain stock for the Sudan was looking more like a small hillock. Plenty of extras have been ordered in advnce of the Autumn preparation season ready for the winter paint a thon.
I am also going to be doing a few bits to magnetise the bases to help with the storage and transport. I also have a few interesting bits on the go as well , but more on that another time.