Today saw a further instalment on the campaign ladder.

P.O. Cooke led his vic with P.O. Walker , and squadron new boy fresh from training P.O. Widdowson , they had been vectored onto a raid on a Chain Home radar site.

On first pass the two Me109 escorts hammered PO Widdowsons Spitfire , sending it spiralling to the ground..the pilot himself was seen to bale out , and was reported safe and well at local anti -aricraft battery...  Damn British fighter advantage had gone on the first shots

Again the Spitfires tight turning circle enabled them to get back round and into the Stukas before the Me109 returned .. PO Walker tailed a Ju87 to destruction before it dropped its bombs... the crew baled out and were captured. 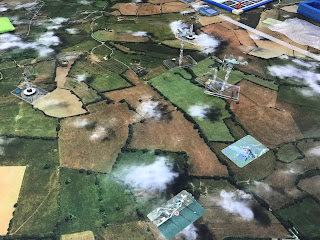 PO Walker was after the 2nd Stuka too , which was getting ready to dive bomb its targets , the Stuka gunner was having a good day, and all of a sudden the Spitfire erupted in a ball of flame . kaboom , killing the pilot instantly . to add insult to further injury the Stukas bombs landed close to target inflicting some minor damage to radar site too..

This left the more experienced PO Cooke on his own with a Stuka and  2  Me109s - the germans were now intent on getting home and celebrating a great victory... PO Cooke was out for vengeance! he had already dove down low in anticipation of catching the Stuka after its bomb run , and despite trading blows while manoeuvring at low level ..the Spitfire soon shot down the 2nd Stuka ... the Ju87 crash landed , severely wounding and blinding the pilot ,. The rear gunner was only lightly injured .. and regaled his fellow prisoners in the POW camp of how he had shot down a Spitfire.

Meanwhile the 2 Me109s were still too high and making toward the home .. , but one was a bit too close to one edge and not taking a straight flight path..  .. and PO Cooke was climbing to get him, a quick burst unsettled the ME109 pilot and maybe damaged the rudder, or the sun was in his eyes,,,  , the Me109 exited the game area to the side ,not the home direction ... gifting VPs to the Brits ...just enough 6 vps to the Brits , 5 to the Germans

PO Widdowson, shot down , unwounded.. but 1 xp gained
PO Walker - dead
PO Cooke claims his 4 aircraft shot down.. one more he will be an ace ... still no sign of promotion or medals ..

German Stuka crews both captured
German fighter crews both landed home safe , claiming 1/2 a spitfire each... - though I suspect they are in for a grilling by the staffel commander