I have been working on a contingent of Austrian Grenadiers for a friend and these have been completed apart from a couple of flags that will need adding.

These guys are again "Elite miniatures" and they were all of the German - Austrian variety not Hungarian.  I did some basic conversion work with the turning of heads (gently as I find with more modern metals there is less give in it and can be prone to snapping easy fixed if they do with drilling and pinning , but more work) I also repositioned some of the officers arms to give some more variety. I replaced all the officers sabres from the thicker cast versions with curved and flattened pins. I use an ordinary pin for this , not dressmakers as they are too hard and don't bend so easily nor flatten out so well. I use a Vee block when bending & flattening . Feed the pin over edge of the Vee and gently tamp it with a hammer to form the curve of a sabre. It is then flattened out on either side of the curve and cut to size. The figure then has a small hole drilled in the sword handle and the cut down pin can either be superglued or soldered in. If I superglue it in I also try to nip the metal around the end of the pin using a pair of snipe nose pliers. 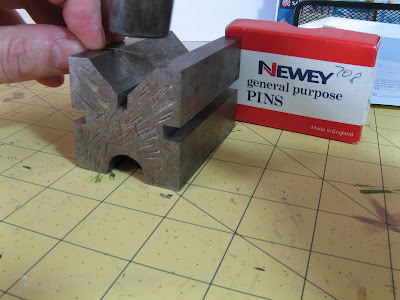 Once ready for painting , they were given an undercoat of light grey - Humbrol 64. This provides a ready made shade area in the deeper parts of the figure - the belts etc. It means I only have to put the white paint where it is required. I would not want to use a wash over white to achieve this as it would mean re-highlighting the white again.

These figures have really good faces which come up really well. More about face painting in April. The flags are from "GMB", the finials and chords are "Front Rank" the flagstaffs are made from Piano wire.To give some additional variety I have also replaced a couple of the mounted officers with some spare Austrian General type figures in bicornes - again to give a bit of individual flair.
Posted by DaveD at 13:09