I had Martin over at the weekend for a full days gaming - we would be joined by James in the afternoon. So for the morning we decided to revisit Death in the Dark Continent rules . We had played a game previously where it had gone very one sided with the European forces annihilating the natives. , and we wanted to revisit it.

This time I set up an ambush game with high quality Beja opposition (Elite Warriors) in tough terrain  to ambush a column of 3 Egyptian battalions , a field gun,  a Naval Brigade detachment with Gardner gun and a baggage train. I wanted to see how things would go if we have the Beja a lot of advantages - and after all its was Martins turn to be the Army!! 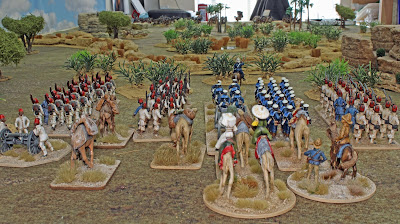 It was a good game , which did look to be going either way - while the columns had reasonable fields of fire it blew the Beja away - mind Martins average score a d20 must have been 16 - (when you hit on 14+!). However when the visibility was down and the Beja could get in they were lethal as my melee dice were on fire too!

It was a hard scenario for the column to win I think, with tough terrain to cover - but the result at least proved that the rules can deliver for the natives in the right situation.

We will play them again , but still think there are some things we don't like which will need a tweak.