Yesterday saw a meet up of the various Old Guard regulars and we had decided to get the ACW stuff out. Stig had previously picked up a copy of Alter of Freedom and after a couple of small games that went really well he wanted us to run a bigger one.

The rules major on the grand tactical- it’s all about commanding  your divisions and brigades and not worrying about formations or what weapons the guys are carrying. We have made sabot trays to hold 6 stands - each of these represent an infantry brigade .

As we are using 10mm rather than 6 that the system is designed for so we increased the size of the battlefield accordingly . 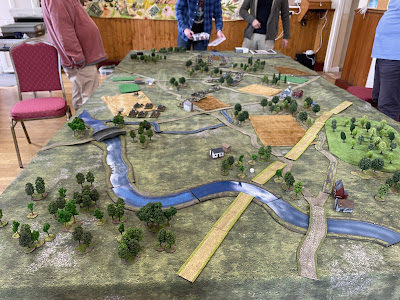 The view down the tabie . The Bull Run river is only crossable at bridges or fords . The main stone bridge would be the main victory objective for the Confedarates along with not having Jackson’s army wing -which starts heavily outnumbered - not losing 5 brigades or more. The game is 7 turns long . 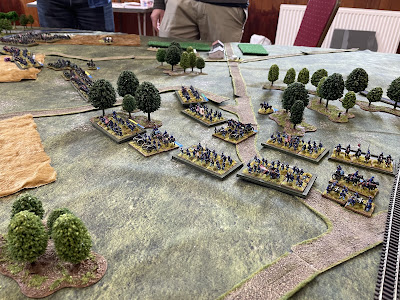 Robert E Lee arrives on turn 1 with some of Longstreets divisions , Longstreet himself does not turn up until the end of turn 5 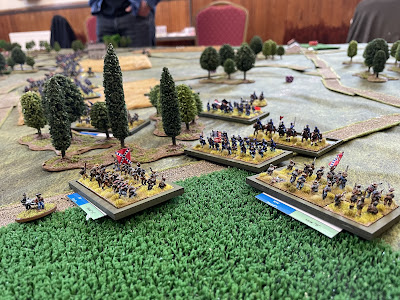 The Union army is 5 Corps strong with a break point of 9 brigades destroyed. Overall the CSA army break point is 10 . 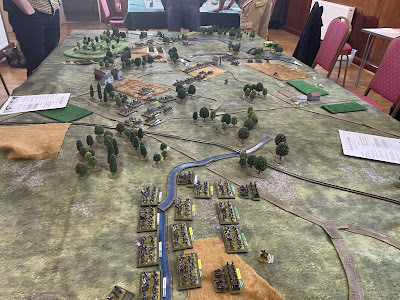 There is a neat in turn clock system which means it’s not  guaranteed all units will move - so if you want to ensure a division follows order you need to spend command points and move priority is then done in a descending order of points bid . 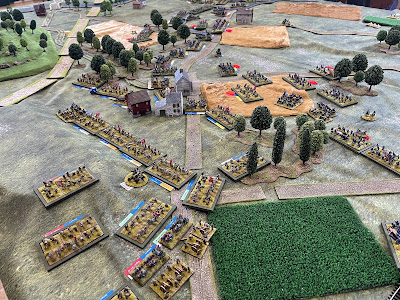 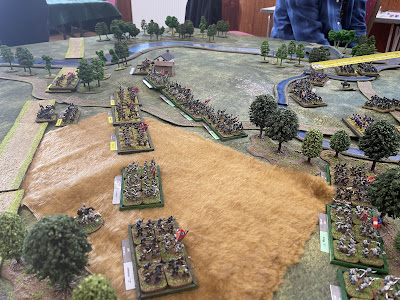 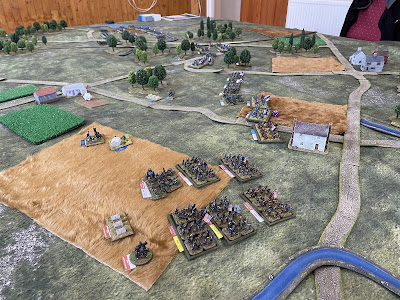 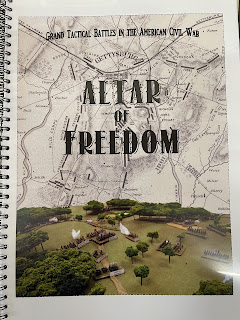 On turn 7 the Union just managed to hold the bridge from an attack by JEB Stuart’s cavalry that had crossed the river at the Ford and chased off the Union brigade at one end . Meanwhile an outflanked and fatigued Union unit at the other end held off two Confederate brigades - aided by Ian throwing a 1 for the CSA close combat - anything but would have seen a victory . The Union had lost 3 brigades with a lot more on the verge . The CSA had not lost any. However as the day ended it was a draw and Lee would choose to break off again .

Martin  spent the day marching his Union reinforcements to the sound of the guns - we all agreed to increase movement rates next time .

Overall it was rated a very good game , and everyone enjoyed the rules - they will definitely be getting more gameplay.

Painting is currently curtailed due to an injury so the projects are a bit backed up at the moment. Things are on the mend however slowly